Off Off Broadway, New Play
Runs through 3.17.13
Theater for the New City, 155 First Avenue 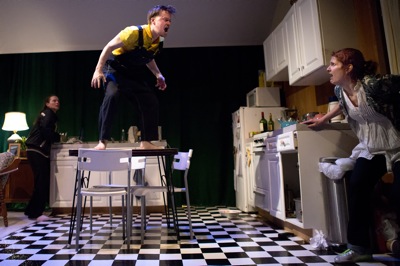 Ripped from the headlines, detailing such a relevant and fascinating story, I’m surprised there haven’t been a thousand plays like Trevor before Trevor. We’ve probably all read of the woman who was brutally mauled by her friend’s chimpanzee in Connecticut in 2009. Some of us have even seen the horrific aftermath on Oprah. But why do animals snap? Why are they beloved by some yet feared by others? How murky is the line between impressive and dangerous? These questions and then some are bravely tackled in Nick Jones’s new play, a smart and original dark comedy that isn’t necessarily based on the 2009 attack but bears many similar details.

Trevor (Steven Boyer) is a show-biz chimp who was featured in a Morgan Fairchild-hosted special on talented animals, including a seal that Trevor can’t stand -- just one of many witty touches. His owner is Sandra (Colleen Werthmann), a widow who’s had Trevor since he was little. But now he’s growing up, which comes with many changes both in Sandra’s household and in the mindset of the locals. When Trevor was younger, he was present for the sheriff’s child’s baptism (and, in a hilarious tête-à-tête, we learn he may have even been the baptizer). Back then, he was adorable, he wasn’t seen as a threat and everything was peaceful. But now the dominant male in Sandra’s home is gone and uh-oh: Trevor’s acting aggressively. And uh-oh: Trevor’s driving a car down the street. Is the next door neighbor’s baby in grave danger or is everyone overreacting?

What’s brilliant about Trevor is that the playwright fights equally for both sides. Completely trusting his audience and refusing to dumb down his script, Jones’s characters are all flawed, yet present valid arguments, opinions, thoughts and concerns. Sandra doesn’t get why Trevor should be caged up all day since he only had one small little tiny baby incident with someone at a grocery store. Neighbor Ashley (Amy Staats) doesn’t get why this wild animal should be in the neighborhood at all. Both cases are powerful, allowing for riveting and sometimes heartbreaking scenes.

Under the sure hand of Moritz von Stuelpnagel, the play moves swiftly and the whole cast shines. They're so realistic that if it weren’t for Boyer speaking the inner thoughts of the chimp, I would have sworn I was a fly-on-the-wall in this small town. Boyer is a revelation, phenomenally taking the audience on Trevor’s constantly altering journey. When Trevor’s confused, we feel frustrated for him. When Trevor’s excited, it’s delightful to observe. When Trevor analyzes the vocal patterns of the humans in his life, it’s captivating to see him put two-and-two together (Sandra’s calm, I like the way that sounds! This cop is timid, I don’t like where this is going!). As his counterpart, Werthmann is devastatingly convincing as a woman who treats her animal like her own son (don’t we all know that person?). And Staats brings a subtle skepticism to Ashley that’s perfect. Sure, this is a comedy. And sure, an actor playing a chimp is charming. But when Ashley is face-to-face with this 200-pound beast, we can almost see her heart beat out of her chest. This. Is. Scary. Staats ably grounds the play with that notion...a notion that is so vital to include, given what Trevor and other chimpanzee pets are capable of.

A subplot featuring another chimp named Oliver (Nathaniel Kent) who's seen only in Trevor's imagination is unnecessary when the scenes occurring in reality are so strong. And although Geneva Carr makes a fine Morgan Fairchild, the plot doesn’t advance by featuring the actress as an actual character in the play.

Still, Trevor is an inventive, funny and poignant production. This entire creative team has dug deep to bring Nick Jones’s thought-provoking piece to life in the best way possible at Theater for the New City.

(Trevor plays at Theater for the New City, 155 1st Avenue between East 9th and East 10th Streets, through March 17, 2013. Performances are Thursdays through Sundays at 8PM. Tickets are $15-18 and are available at smarttix.com.)