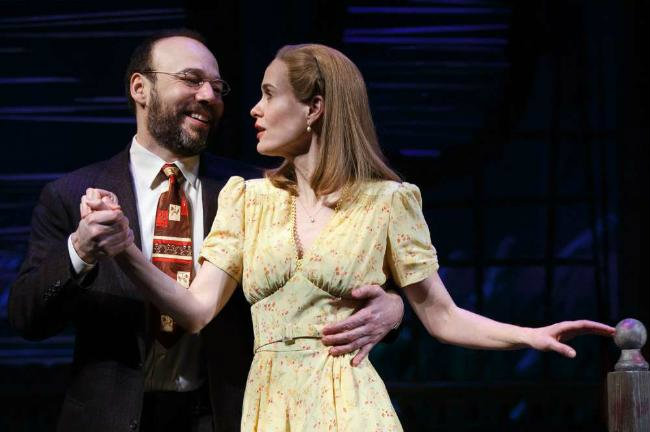 BOTTOM LINE: Lanford Wilson’s Pulitzer Prize-winning drama about unrequited love is staged in a classic production that is superbly acted.

Lanford Wilson is making the off-Broadway rounds this month with two presently running revivals. The Signature Theatre’s production of The Mound Builders opens later this month, and Wilson’s Pulitzer Prize-winning Talley’s Folley is well underway at Roundabout’s Laura Pels Theatre, in a production that is as affecting as it is well acted.

As the lights dim, Danny Burstein coyly walks down the house right aisle and steps beyond the ornate proscenium, decorated with blooming purple flowers, and onto Jeff Cowie’s ramshackle set, depicting a run-down boat house in Lebanon, Missouri. Burstein addresses the audience in a Yiddish-tinged voice, as his character Matt Friedman, and lets his viewers know that what they are about to see is a waltz. From the wings, a drawn out Southern accent is heard calling to Matt. The rich voice becomes louder as it approaches the stage, where it ultimately takes the form of the stoic Sally Talley, in an appealing yellow dress (costumes by David C. Woolard). Once she roots her presence on the stage the play begins to live out the waltz-like story for which Matt has been preparing his audience. Despite the warmth that Sally’s garments exude, her sunny outfit belies her tough exterior, which Sarah Paulson conveys in her richly textured performance.

To see these two actors share the stage for ninety-seven minutes (which Matt stresses at the top of the show) is reason enough to attend this otherwise typical Roundabout production. Set in the waning days of World War II, the effusive Matt meets the reticent Sally in her family’s abandoned boat house, where he attempts to convince her to marry him. What ensues is an aromantic tennis match where Matt catalogues the reasons they should be together and Sally bats them off as easily as though they were mosquitoes on her family’s lakeshore. If this is a waltz it is a fraught one. Though they share a romantic past, each character possesses a secret that prohibits the advancement of their relationship.

It is always difficult to assess where a director’s work ends and an actor’s begins, but Michael Wilson undoubtedly deserves some of the credit for this superbly acted production. In this one-scene, one-set play, Wilson’s touch is unobtrusive and he allows the expert actors to speak the luscious text without any superfluous bells and whistles. His directorial touch is evident in the shaping of the characters and performances onstage. And oh, what performances!

In his role, Danny Burstein is all tactics, brimming with ebullient physicality. He is not the suave and debonair leading man who is destined to sweep his heroine away into the sunset, and he therefore creates a performance that is endearing and unrelenting, lovable and unyielding, quirky and persistent. Despite his dogged pursuit of Sally, Burstein fills each moment with warm-hearted compassion that demands him to be loved; if not by Sally, then at least by his audience. The charm with which he infuses Matt not only is guaranteed to elicit smiles, but also reaffirms him as an inventive actor who digests every bit of his meaty characters.

Sarah Paulson is every bit his equal as Sally Talley. While Burstein has the more extroverted character, Paulson fills hers to the brim with nuances that captures the effects of Miss Talley’s crippling personal history. Burstein is a tough act to dismiss, but she deflects every one of his advances with her armored persona that refuses to be cracked. However, once Burstein breaks through Paulson’s shell, her trapped emotions pour forth giving her character a much needed release. Once the characters connect, their affection flows out into the audience in a wave of pathos that left many audience members holding hands when exiting the theatre.

This revival is a solid production, made worthwhile by the actors inhabiting this unconventional though beautiful love story. Yet despite all of the good-natured conflict and romance, the show is not destined stay in the forefront of one’s memory for very long. When producing a revival, usually the question “why now?” is asked. Perhaps in this case, the relevance is due to the fact that Talley’s Folly is set at the end of World War II, when America’s economic future was uncertain (though it resulted in the USA’s prosperity). Not a terribly convincing reason though. Anyone who frequents the Roundabout, is likely to expect pretty productions of pleasant American classics, that are populated by sure footed stage actors and floundering film actors (aka expensive regional theatre with movie stars--ie. Picnic). Talley’s Folly is a lovely production, and Burstein and Paulson are splendid. Nevertheless, this revival--like most belonging to this non-profit theatre--would feel more valuable to an audience outside of New York City. Isn’t this always the Roundabout Folly?