The Spring Fling: The Morning After 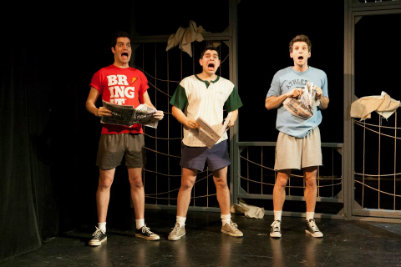 F*IT Club's The Spring Fling: The Morning After is back for its annual fest of new work. This year offers six short plays, by Joe Tracz, Hilary Bettis, Heidi Schreck, Krista Knight, Nick Jones, and Janine Nabers. Short play extravaganzas are often a mixed bag (lots of artists, sharing resources, etc etc), but The Spring Fling has its S*IT together. Not only are all of the pieces thoughtful, but the overall production values make for a cohesive and enjoyable evening of theatre.

Producers Allyson Morgan and Mara Kassin have assembled a stellar team of playwrights, performers and directors to bring these works to life. The Spring Fling's subtitle is "The Morning After," and all of the works deal in some way with that notion, though each remains distinct. Some are comedies, like Tracz's Beyond the Sea, which follows everyone's favorite mermaid Ariel after her wedding to Prince Eric. Some start out as comedies and then take a decidely not at all funny turn, like Bettis's The Mud Hole, about an Amish community and a Rumspringa catastrophe.

Schreck's Hello Ms. takes us into the Ms. magazine office the day before their first issue hits newsstands. It's a poignant exploration of an important day -- and shout-out to costume designer Stacey Berman and set and props designer D. Schuyler Burks for truly making me believe it was 1972 (or present day Williamsburg). The piece feels like it wants to be part of something bigger, and all involved (including playwright Annie Baker as Gloria Steinem) work together to create a nuanced production.

Knight's Coach Darling is a mash-up of Peter Pan and a whodoneit, with live musical accompaniment and some fantastic soccer choreography. Nabers's Us; A Memory is a heartfelt reflection of a couple in marriage counseling and how they ended up there. It gets to some deep stuff, and actors Darcy Fowler, Alex Mickiewicz, and Danielle Slavick's performances make it very affecting.

But my favorite piece of the night, Jones's Thanks for the Bowl with the Spoon in it, Helen!, deserves special attention because when it was over I literally exclaimed an audible sigh of sadness and commiseration for the women in this short solo piece (performed perfectly by Allyson Morgan). Through this monologue, a roommate talks at a door, really to the person on the other side of the door, who is presumably either ignoring her or not listening (likely because she's having sex). Anyone who has dealt with the awkwardness of living with a stranger and learning about said stranger's habits and personal life will surely understand the mental anguish that can accompany this situation.

The Spring Fling: The Morning After includes work by artists who are simply good at what they do. This evening of quick and high-quality work is well worth your time and attention.

(The Spring Fling: The Morning After plays at The Medicine Show Theatre, 549 West 52nd Street, 3rd Floor, through April 14, 2013. Performances are Thursdays and Fridays at 8PM; Saturdays at 2PM and 8PM; and Sundays at 2PM. Tickets are $18. For tickets visit brownpapertickets.com. For more show info visit facebook.com/effitclub.)