Concieved and Directed by Molly Ballerstein; Choreographed by Dana Boll
Part of the 2013 Frigid Festival

Off Off Broadway, Dance Theatre
Runs through 3.2.13
Under St. Marks, 94 St. Marks Place 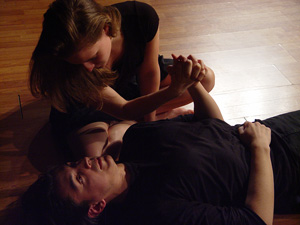 BOTTOM LINE: The Sandman's Coming is a dance theatre piece incorporating video and nursery rhymes to explore one man's struggle with addiction and how it threatens his relationship with the woman he loves.

Concieved and directed by Molly Ballerstein, The Sandman's Coming explores the torments of one man's addiction as he is incessantly pulled back to the drug he can't escape. Told primarily through dance, the piece incorporates video, nursery rhymes, and a limited amount of text, switching between the point of view of the addict (Nelson Patino, Jr.) and the girl who loves him (Anya Gibian). The third character in the piece, a personification of heroin played with dynamic, visceral abandon by Lantie Tom, has no perspective to speak of, and yet she drives the piece through her highly active role in the narrative.

Sandman delves into the difficulties of two relationships for the User: the one he has with his girl, and the one he has with his drug. For the majority of the piece, the User plays a passive role, while the girl watches and hopes (hence her character's monicker The Watcher) and Heroin runs amuck. The progression of Heroin's interaction with the User is fascinating. In the begin their behavior is like a preteen boy who has fallen in love with a cool, teenage girl who teases him. From this jeering superiority, Heroin's actions become abusive, then dominating, until in a moment of ultimate control Heroin puppeteers the User. This reflection of the common slope to addiction leads to the inevitable rock bottom, and the audience sees with the Watcher that the User has completely succumbed to Heroin, unable to resist her or fend off her demands.

A genius parallel emerges within the piece through Ballerstein's clever casting of another woman as Heroin: Heroin becomes The Other Woman. The same strain is caused by the User's shift in attention and priorities because of his addiction as would be caused if he were having an affair (on top of the myriad other difficulties that spring forth from his addiction). While the intricate choreography by Dana Boll includes elements of seduction, however, the relationship between the User and Heroin isn't sexualized -- it's a matter of power.

The episodic script succeeds overall, however the statements made by characters between episodes are sometimes so far apart that they lose the resonance of connection and stand alone as single sentences. Also the jump from episode to episode would be smoothed if the separate songs were joined into a continuous score.

As with most festival shows, Sandman is ill-served by the restrictions to production elements and lighting opportunities, although lighting designer Tony Lepore manages to create variety and mood from the rep plot. The anchor of the show comes from the haunting and sometimes jarring sound by composer/designer Dede Booth and the abstract videos by Dan Lance, the latter of which Sandman employs when the User uses.

The Sandman's Coming is a highly ambitious and ultimately effective exploration that engages dance, media, sound, and familiar nursery rhymes in its storytelling. Theatrical, unexpected, and vivid, Sandman is important both in its topic and in its ingenuity. Watch for further progress on this vigorous piece by Ballerstein.

(The Sandman's Coming plays at Under St. Marks, 94 St. Marks Place between 1st Avenue and Avenue A, through March 2, 2013. For more info visit the FRIGID website.)