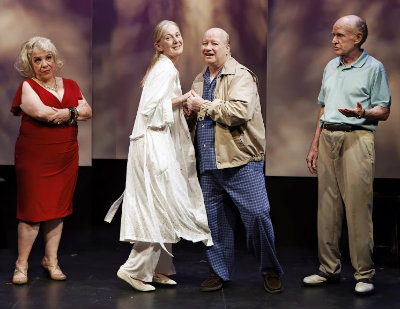 Throughline Artists’ Summer Shorts series is just what it proposes to be (at least as far as Series B is concerned). For the price of one ticket you get 3 short plays perfectly suited for a summertime brain capacity. This isn’t to say that the plays are mindless -- far from it. Playwrights Marian Fontana, Paul Weitz and Alan Zweibel have brought three plays that are focused on universal American domestic issues in lighthearted and often refreshing ways. They are bite-sized and entertaining enough to grasp for the most sun-drenched attention spans, yet invigorating enough to give the right jolt of human and social reflection.

Curated in the most effective order of increasing theatricality, Series B has a common thread of lowered expectations in love. When society and Disney films set the bar so high for “happily ever after” how do we confront the reality of domestic partnering? These plays are also in order of stages of relationships.

The evening opens with Marian Fontana’s play Falling Short directed by Alexander Dinelaris. In this contemporary dating story we meet Lee (a perfectly witty Kendra Mylnechuk), a Brooklyn writer currently working on a story about urban chicken farming. Frustrated with a self-inflicted career fate of “having a paper due for the rest of your life,” Lee turns to an online dating site for distraction. Fontana creates a humorous array of online characters all personified by the varied performance of Shane Patrick Kearns. Out of desperation she takes a chance on a struggling actor working as a knight at the Renaissance fair.

The knight in question is an overly enthusiastic but ultimately caring gentlemen named Nate (a charismatic J.J. Kandel). Although he turns up to the date twenty minutes late and wearing a metal gauntlet, he somehow wins over Lee with brute honesty. While Nate wasn’t as appealing on paper, Lee surprises herself as she is swept away by a man who simply isn’t hiding anything and allows her to drop her guard. Fontana’s play could come off as trite in the hands of a lesser director and cast, but Dinalaris and his actors bring a caliber of committed performances to the piece which unearths the play’s cleverly drawn heroine and earns its modern fairy tale ending.

The next play on the docket is by Paul Weitz (most notable as the screenwriter of films such as American Pie and About a Boy). Moving further down the relationship timeline, Change centers on a husband and wife of fifteen years whose college friend returns to their lives after years of drug rehab. Carla (Allison Daugherty) and Ted (Alex Manette) are thoroughly adults with kids and far removed from their seemingly wilder days of college. However, the return of Jordan (Michael D. Dempsey) has them reliving the past as certain inner desires bubble up to the surface. Weitz’s structure deliciously devolves into chaos as Jordan manipulates and exposes the content couple through vice and sexuality.

Director Billy Hopkins embraces the deceptive setup of the play and guides the actors with great restraint through outlandish moments. Dempsey, as Jordan, connives his way through the play balancing the role of villain and liberator. Manette and Daugherty create a disorienting physical and tonal journey as the perfect couple cracking. All the while Weitz’s token dark humor prevails. In the earlier half of the play the actions of the characters border on obnoxious, but as more truths are revealed the play takes on more substantial context. The play welcomingly has the only bleak ending of the evening. No line sums up a superficial marriage in the play as much as Carla’s last metaphorical reference to her child’s request for water: “Maybe they’ll forget they’re thirsty.”

Alan Zweibel is given the final slot of this series, and his play Pine Cone Moment deserves to be the last taste the audience leaves with. Zweibel is a comedy veteran and longtime television writer (and an original writer on "Saturday Night Live"). He also collaborated with Billy Crystal on the Broadway show 700 Sundays. In Pine Cone Moment he creates a story that clearly showcases his experience and maturity as a comedic writer among the caliber of Woody Allen and Elaine May. He manages to encapsulate light comedy, wit and mortality.

In the relationship spectrum we experience the afterlife of two relationships as Harry and Emma cope with embarking on a new romance years after the deaths of their spouses. As a perfect bookend to Fontana’s first play on the bill, Harry and Emma rely on their computers for innocent digital flirtation. Harry is eager to bring the relationship to the next level on a romantic excursion to Disney World. Emma is reticent as she has yet to experience the “pine cone moment” with her old friend Harry. She explains how this refers to The Sound of Music and “when Captain Von Trapp told Maria he started falling in love with her when she sat on a pine cone...” When Emma gets cold feet and Harry is afraid to press the issue, their deceased spouses come back into the picture to urge Harry to go over to Emma’s house and fight for her.

The play is about moving forward with life and the eternal possibility of new love. Theater veterans fill the cast led by wonderfully humorous and touching performances by Brian Reddy and Caroline Lagerfelt. James Murtaugh is splendid as the encouraging late husband. However, it is Camille Saviola as Harry’s late wife Bunny who steals the show, and evening, in terms of laughs. Saviola digs her teeth into the loud brash role, but still finds the heart of her character and the play. Pine Cone Moment is directed with love and expert timing by Fred Berner and will leave you with tears and tired laugh muscles.

Series B of the Summer Shorts contains lesser known playwrights in the theater world than Series A, but these world premiere plays delight and entertain in a wonderfully surprising manner. Following a trajectory of American relationships they are a perfectly suited trio of plays from three very different voices and styles of writing. If you’re looking for light summer theater that is somewhere below the intellectual level of Robert Wilson, but above reality TV, this is a perfect mix of low brow and smart writing all executed by superb actors and directors.