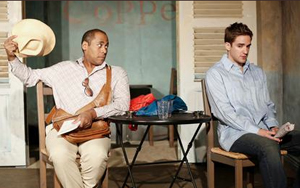 BOTTOM LINE: Cuban homophobia begins to unravel in this occasionally touching but often heavy-handed revival of a 34-year-old drama.

Writer Nelson DeMille once quipped that “somehow our devils are never quite what we expect when we meet them face to face.” This could be the subtitle of Senel Paz’s 1979 play, Strawberry and Chocolate.

The “devils” in question are Diego, a flamboyantly 40-something gay man (played with the perfect mix of sadness and swagger by the wonderful Roy Arias) and David (AJ Cedeño), the straight, Communist Party-loving, homophobic college student he meets in a Havana ice cream shop. At first David is revolted by the elder gent and he doesn’t miss a beat in denouncing Diego’s sinful, counterrevolutionary lifestyle. In fact, he and his friend Miguel (played with smoldering fury by Andhy Mendez) are so filled with loathing that they concoct a plan that will expose Diego’s purported misdeeds to the authorities. The plan involves David ingratiating himself with Diego—and in the process uncovering the many secrets he is presumed to be hiding. Ever vigilant, David watches for evidence that Diego is cavorting with foreign dignitaries. He also seeks evidence of contact between Diego and Miami-based counter-revolutionaries and is on the lookout for Diego-led schemes to celebrate—rather than denounce--the life and work of queer artists, musicians, and writers.

But something happens on the way to the precinct: David begins rethink his biases and question the Party-driven prejudice he’s swallowed whole. In fact, over time he begins to truly enjoy spending time with Diego, a worldly, well-travelled, and highly educated man who is unlike anyone David has ever known. This slow dismantling of hostility should be lovely — but instead it feels dated and preachy, with dialogue that is more speechifying than conversation. It’s too bad, since homophobia continues to fester throughout the world.

For its part, since the play’s debut three decades ago, Cuba’s Centro Nacional de Educacion Sexual (CENESEX, The National Centre for Sex Education, headed by Mariela Castro, niece of Fidel and daughter of Cuban President Raul Castro) has launched an annual Day Against Homophobia (May 17th), and has worked hard to eradicate the ingrained ideology that undervalues the contributions of Cuba’s LGBTQ community. Does this mean that heterosexism has been eliminated? Sadly, no, and as The International Lesbian, Gay, Transgender and Intersex Association notes, in many regions of the island community members fear public reprisals should they dare to go public with who they love. That said, Cuba’s first transgender lawmaker was elected to public office in 2012 and gay characters now regularly appear on telenovelas, the wildly popular soap operas that are meant to educate as well as entertain.

But back to Strawberry and Chocolate. Since Cuba has made significant inroads in chipping away at its irrational revulsion toward all things homosexual, I’d love to know why the International Studio Theater chose to revive the play. For despite stellar acting, wonderful staging, and moments of tender engagement, overall Strawberry and Chocolate leaves much to be desired. While it is thrilling to see David overcome his hatred of Diego and truly embrace him as a mentor and friend, the presentation involves numerous clichés and language that befits a podium rather than a living room. (At one point, for example, Diego tells David that, “He who slaps the face has an easier time forgetting than he who receives the slap.”)

Still, as a reminder that intolerance hurts both victims and victimizers, Strawberry and Chocolate is potent. What’s more, when the devil of homophobia is revealed one can only wonder what other misconceptions are waiting to be unveiled.