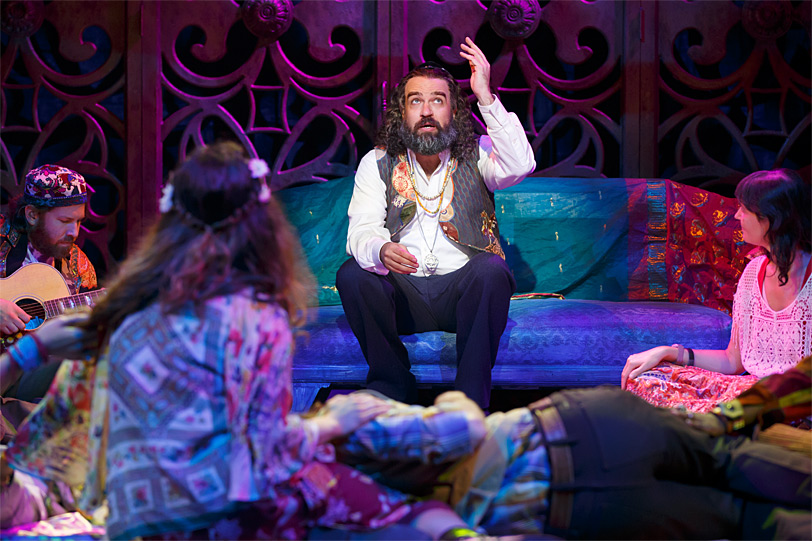 BOTTOM LINE: While not born again, I thoroughly enjoyed my time with this congregation.

You know what unites, heals, and brings joy to those who let it into their lives? Religion. And also, music. And you know who is uniquely able to preach peace and love given both sets of credentials? A singing rabbi.

Soul Doctor, the new Broadway musical about real life Rabbi Shlomo Carelbach (1925-1994), is certainly a show by and about the Jews. But it's a show for everybody. The heart and energy within this story are about the human condition, how we're really all brothers and sisters when you get right down to it. The sheer joy that Soul Doctor brings is a treat for the audience, and it's hard to not be won over by the infectious, folk score that brings to light the life of a beloved leader.

Shlomo (Eric Anderson) grows up in pre-Holocaust Austria, and moves to Brooklyn with his family shortly after the Nazis invade. (I'm sure much of Carlebach's history is truncated for the sake of the show, so these bits of information relate to the musical's interpretation of events and not necessarily history). His father (Jamie Jackson), an Orthodox rabbi, opens a Yeshiva for his sons and neighbors. Soon, Shlomo's brother Eli Chaim (Ryan Strand) joins the Hassidim and Shlomo then follows. Shlomo eventually meets Nina Simone (Amber Iman) -- yes, that Nina Simone -- in a jazz club uptown, and she encourages him to share his music with the world. Shlomo leaves behind his traditional Orthodox ways and travels to San Francisco to found the House of Love and Prayer. He eventually moves to Israel. He amasses a devout and loving following of fans and friends along the way.

This is the story that Soul Doctor tells, from Shlomo's childhood in Europe to his eventual relocation to Israel. Book writer and director Daniel S. Wise creates a literal trajectory of events, letting things begin at a concert in Austria with good friends Nina and Shlomo performing alongside one another. We know where Shlomo's headed, and when we return to the concert, coming full circle, we've experienced a life well worth theatricalizing. That said, there aren't any surprises along the way. Consequently, the production's success hinges on the performances and the music; the story itself is merely the foundation.

There are a handful of fantastic moments in Soul Doctor, moments of pure delight. When Shlomo first meets Nina and she sings "I Put a Spell On You," it's crystal clear why he's instantly interested. Iman is a force as Nina, her powerful, gritty voice lingering in the air long after the song has ended. And Nina and Shlomo make a great odd couple; their scenes together are the most interesting in the show.

Unfortunately there aren't enough of those meaty moments. Soul Doctor, instead, is filled with movement-centric production numbers letting Shlomo's music take center stage. This might be the ultimate goal of the production -- to share Carlebach's music -- but it quickly feels trite. Luckily, Anderson's impassioned performance and the energy from the capable ensemble keep things moving briskly, so much so that the 2 hour 30 minute performance doesn't feel long-winded.

Soul Doctor is Fiddler on the Roof meets Hair with modern dance, a somewhat dysfunctional mash-up that works surprisingly well, thanks in part to its constant energy and commitment to entertain its audience. It's hard to not be won over by Shlomo Carlebach and his "tribe" of followers. And those that recognize his melodies -- "Am Yisrael Chai," and "Ein K'Elokeinu," for example -- will find additional joy in the cultural connection. Soul Doctor is sweet and sincere; what it lacks in innovation or artistry it makes up for tenfold in contagious jubilation.