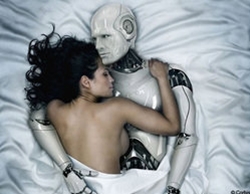 BOTTOM LINE: A play truly faithful to its name -- be prepared for a night of comical stories involving lots of sex with robots layered with some thoughtful topics on what it means to interact with a human-like machine.

Sex. With robots. Those three words could well sum up the review for this play –--I mean what more could you possibly want in a show? But, for the sake of those of you who are still hesitant about hopping on the 7 Train to Long Island City, I’ll delve a little deeper into this collection of short plays (and a song by Nat Cassidy) of people getting messy with their machines.

First of all, I have to say that productions by Caps Lock Theatre are pretty much an assurance of an entertaining and unforgettable experience. One of their latest productions, Mrs Mayfield’s Fifth Grade Class of ’93 20 Year Reunion, was set in a small apartment in Astoria and immersed the audience into the craziest and most bizarre house party ever. And this time, the Sex With Robots Festival is just as entertaining, combining the hilariousness of the topic with a large dose of sexual nudity and stories that will first make you laugh, then make you laugh some more, and finally, make you think. And Caps Lock is just as creative when getting funded -- they raised their complete budget for the festival through a crowdfunding campaign.

Except for one of the stories, which has the main character getting down with old DVD players and a radio system, all of the robots are extremely human like. And that’s what makes the play so interesting above all the comedy -- when these machines are so much like us, then they become us, and we start to feel human emotions towards them like empathy or jealousy. The first story, Simon Says (by Richard Lovejoy and Eric John Meyer), epitomizes this really well, showing a middle-aged man demeaning his human like robot by ordering it to do some pretty humiliating tasks: pouring water on itself, stripping at a word’s notice and then eating bananas off the table without any hands. When prodding the audience to give the robot a task, audience members responded by either giving an equally humiliating task to do (“put your penis in the glass of wine”) or by rebelling and telling the robot to ignore what his horrible master is asking him to do, which was received with much applause.

Another story, A Real Boy (by Natalie Zutter), shows a girl who keeps a list of her sexual partners, but does not include her personal sex robot on that list, much to his disproval and confusion. Does he not give her the best orgasms? Does he not tenderly embrace her afterwards? Does he not tolerate her adventures with others? So why shouldn’t she include him on that list? She ends the discussion reminding him that he’s just a robot, climaxing and then proceeding to reset his memory.

The stories are full of inversions of this type: a robot feeling jealous, some rough looking guys talking about the importance of foreplay when pleasuring their robot girlfriend (“I take at least 20 minutes, there’s just so much you can do”), and how a monotonous Japanese servant robot can spark the missing flame in an equally monotonous marriage. The large cast is extremely talented, combining a knack for comedy with some quality acting, especially during some of the more serious tales. You’ll also get more than an eye full of boobs, butts and penises in quite an explicit manner -- so be prepared!

If you’re up for an extremely funny, unusual and entertaining evening which will provide for some geeky conversation on your way home, get yourselves over to the Sex With Robots Festival and do it fast as it’s only on for a short run. It will be the best 18 bucks you’ll spend in a while!

(Sex with Robots Festival presented by Caps Lock Theatre plays at The Secret Theatre, 4402 23rd Street, Long Island City, through November 10, 2013. Performances are at nightly at 8pm. Tickets are $18 -- $15 for students -- available at brownpapertickets.com.)