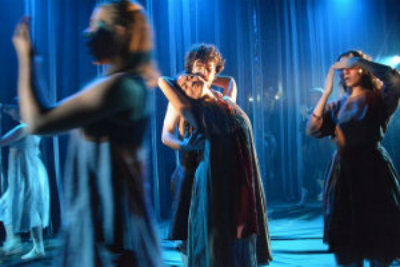 BOTTOM LINE: Strong performances from the cast, as well as strong directing, help to make this highly unusual story engaging.

After Arthur Miller’s play The Crucible hit the stage (and later graced the screen), few have tried to tackle the story of the Salem Witch Trials, perhaps not seeing any room left for a new take. However, playwright Adriano Shaplin’s take on this familiar story is so unusual that it bears only a cursory resemblance to previous takes on the subject.

In this version of the story we meet the villagers of Salem who live in constant fear as the neighboring towns are destroyed and killed off by “Indian attacks.” Their constant toiling is emphasized by movement in which the people are shown making repetitive motions.

Meanwhile Sarah Flood (Kate Thulin) and Juyoung (Jamie Bock) are two young women living in some time in the future. We are told little about the lives of these women, but the future sounds peacefully dull: eating and showering are obsolete and people live sequestered off from the world in “pods”. Sarah decides she wants an adventure so she plans to use a time machine to travel back to Salem to stop the deaths of the women who are accused of being witches.

The villagers use modern vernacular and actions such as fist bumping, making this village seem like an alternate universe rather than the actual past. During the course of the play the words “God,” “Jesus,” and “Bible” are never uttered. Instead the villagers speak of their love for “The Book” and say that “He” is always watching and always knows everything.” “He” is a fearful being that keeps them always painfully striving for perfection. In one significant scene Anne Jr. (Michelle Silvani) is forced by her parents to keep a journal in which she must confess to every questionable thought she has had. Anne says that she was told “..that he reads your journal. The journal on your inside. That I must write and confess every thought that he will see it, no matter what. He has in fact already seen it, read the book of my life, made his judgment.”

A small group of mostly female villagers splinters off from the suffocating confines of the church and start their own prayer group out in the woods where their higher power is a being that creates the beauty they see in nature. Sarah soon slips in among the villagers, pretending to be a mute survivor from a nearby attacked village. While she has a plan to “zap” the sheriff, she becomes caught up in the drama unfolding in Salem (the specifics of the women’s plan to change the events of the witch trial is never fully explained.)

While the strange mash up of historical fiction and science fiction might not be a concept that all audience members will find palatable, it certainly catches your attention. The plot is well augmented by movement (something also used successfully in The Flea’s recent show A Cautionary Tail) which is used here to imply emotional states and setting. The actors and director Rebecca Wright imbue lines with strong comedic delivery making the dialogue more enthralling (Jamie Bock and John Paul Harkins are particularly adept at this.) Script-wise, this intriguing concept could have been better fleshed out, as could the themes at the heart of the play. The strongest moment arrives at the very end, when Juyoung realizes that when one tries to change the past they jeopardize the future. As a whole, this play is well produced and acted, helping to make its unique story a consistently compelling one.

(Sarah Flood in Salem Mass plays at The Flea Theater, 41 White Street, through October 27th. Performances are Tuesdays through Saturdays at 7PM and Sundays at 3PM. Tickets are $15-$55 and are available at OvationTix.com or by calling 866.811.4111. For more information visit www.theflea.org.)