Salesmen: A Meditation on Masculinity and the American REAL! 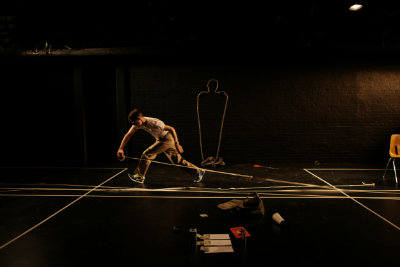 Nick Smerkanich in SALESMEN: A MEDITATION ON MASCULINITY AND THE AMERICAN REAL! Photo by Suzi Sadler.

BOTTOM LINE: An experimental journey exploring questions on masculinity and its role in American Theatre.

The full title for Theatre Reconstruction Ensemble’s latest production is “Salesmen: A Meditation on Masculinity and The American Real!” Meditation is the key word in that subtitle. Certainly not for the faint of heart, this experimental piece is comprised of multiple vignettes exploring masculinity and American theatre history. There is no particular story or plot to this piece. It should be made very clear that TRE’s Salesmen is non-traditional theatre in every sense of the word, however there are many shining moments in the production that make it a valuable experience for those willing to be taken along for the ride.

Salesmen begins with silence as Nick Smerkanich writes what turns out to be the end of a play. The silence continues for some time as he attempts to catch an invisible fly and draws in a notebook. Smerkanich is so invested in his actions that the risk of placing a single actor on stage with no sound and having him complete simple tasks for several minutes pays off and turns out to be rather engaging. That said, it’s difficult to find meaning behind the actions and after Salesmen gets going it becomes evident that searching for meaning among some of the vignettes is a futile endeavor. Other vignettes, however, are endowed with metaphor and symbolism giving the piece a true sense of meditation.

Eventually the rest of the cast, comprised of seven other men, join him. The piece moves through various themes of masculinity, primarily using mime combined with a terrific score by sound designers Eben Hoffer and John Kurzynowski. There is little text throughout the piece save for lines pulled from American masterpieces like Death of a Salesman and Golden Boy. The only other text that stands out is a note from TRE’s Artistic Director, and director of this piece, John Kurzynowski. The note explains Mr. Kurzynowski’s purpose and thought process behind the piece, not apologizing for its lack of coherent structure but rather enlightening the audience to the struggles he and his team faced in exploring what it meant to be a man in theatre in the 1940s and '50s as well as how that relates to the work the audience was seeing before them. Interestingly enough, even the note itself becomes drowned out by the ensemble performing various mimes of “masculinity” to a score that rises to a deafening climax -- serving as a metaphor of the struggle to find resolution within the ensemble’s questions.

Two moments in the production stand out for their sense of structure and meaning. The actors take turns enacting famous movie scenes from a variety of films featuring “masculine” characters, including Casablanca and A Streetcar Named Desire. As the music builds behind the actors they perform each reenactment, playing every character in the scene by themselves, with vigor, accuracy, and intensity. It’s an absolute pleasure to watch. Another moment in the piece features ensemble member Hugh Trimble building a sort of shrine to Death of a Salesman in which he lays out various items related to the iconic play, which subsequently also relate to masculinity and “The American Dream.” Shaving cream, a flask, money, etc. As he does this the other performers watch with fascination. Trimble then proceeds to outline the shadow of a man on the back wall of the theatre with tape. It remains there the rest of the play, in a hauntingly constant reminder of the purpose of the piece and the struggles of the ensemble to explore their topic.

Salesman is an experimental wonderland. The performers are fearless in their explorations of the theatre space and even time itself, as is the case in which one performer, Eben Hoffer, takes at least two minutes to sit in a chair in slow motion while two other performers stare him down. If you like work that challenges the boundaries of theatre and explores historical influences on contemporary theatrical attitudes then Salesman is for you.

(Salesmen: A Meditation on Masculinity and the American REAL! plays at HERE, 145 6th Avenue, through November 9, 2013. Performances are Wednesdays through Fridays at 7PM; Saturdays at 2PM and 7PM; and Sundays at 7PM. Tickets are $18 and are available at here.org or by calling 212.352.3101.)