Tickets can be purchased at the door. To reserve space, email mrtreserve@gmail.com 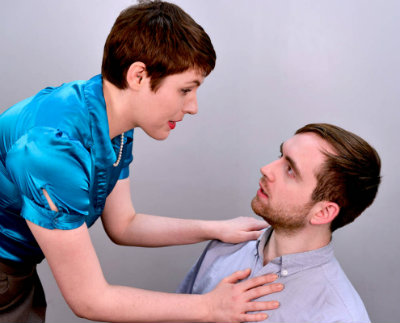 Loralee Tyson and Alex Engquist in A SERIOUS PERSON.

Manhattan Repertory Theater is heating things up this winter with their One-Act Play Competition, in which plays compete against one another to win a top prize which is awarded based upon the audience’s votes. Among the notable plays in the second series is A Serious Person by John Doble. Doble has had other success with one-acts, including as a finalist for best play in the 2012 Midwinter Madness Short Play festival.

This work focuses on a blind internet date in which a man must deal with an eccentric and admittedly bipolar airline ticketing agent. Rather than spend time with typical first date small talk, she shares her strange and laughable theories which include speculating that cannibalism is a basic part of human nature. (She offers up as evidence the fact that terms of endearment often involve reference to food.) Loralee Tyson gives a standout comedic performance as the play’s unhinged woman. Her knack for comedic delivery, combined with director Olivia Harris’s adeptness at comedic timing, allows the production to milk every possible laugh from John Doble’s hilarious script. As zany as some of the lines are, the script rings true as an accurate depiction of the ways we fumble for human connection in this era of disconnection. As A Serious Person was selected as a finalist, audiences will have another chance to catch this work on January 30th.

Another noteworthy play performed during the second series of one act plays is Revolution by Scott Decker. This unstructured stream of consciousness play consists primarily of jaded, cynical characters who present their darkly funny views on life as they physically rotate around the playwright himself, who then reveals his own dark world view. Regardless of whether or not Decker finds success in the festival, his name is surely one to look out for in the future.

(A Serious Person plays at Manhattan Repertory Theater, 303 West 42nd Street at 8th Avenue, on January 30, 2013. Performance time is TBD, for more information go to www.aseriouspersontheplay.com or www.manhattanrep.com. Tickets are $20 and can be purchased at the door and reserved by emailing mrtreserve@gmail.com.)