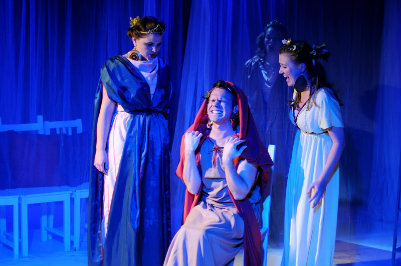 BOTTOM LINE: An exciting, original, opera-infused play about Rome, pornography, and the dangers of ambition.

In RISE, playwright Joseph Samuel Wright explores two vastly different worlds woven together by thematic threads. In ancient Rome, the 14-year-old Elagabalus (Jamey Grisham) has been given the throne, thanks in part to the machinations of his ambitious grandmother, Julia Moesa (Margaret Meyer). However, the young emperor has proven to be a liability as his taste for the unconventional, especially in his sexual inclinations, is beginning to alienate the people of Rome. Elagabalus, empowered by his divine heritage, has decided to change all the rules; he marries a Vestal Virgin (Jennifer Teska), he castrates nobility, and he even makes arrangements for a sex change. Faced with this uncontrollable element, Julia Moesa must find a way to regain control, even at the expense of her grandson.

Cut to L.A., where porn star Brick Richards (Tafe Gato) is being nudged toward mainstream entertainment by his unsinkable agent, Myrna Malone (Crawford M. Collin). Brick, whose real worth is measured more in inches than I.Q., is hesitant, and his attention is soon diverted when Myrna’s assistant Glen (Trey Gerrald) becomes his own sexual plaything. The love-obsessed Glen, believing he has found something true at last, does not mind playing the submissive for Brick, but after visible scars and hospital trips, people are starting to get concerned. Glen’s roommate, the also-ambitious Mia (Arielle Hader), is among that number, but she sees an opportunity to manipulate Brick into helping her launch her cosmetics line, to the detriment of a deal already forged with Myrna. Mia and Brick begin an affair in which Brick is the slave to Mia’s sexual dominance, but when Myrna finds out, revenge becomes the order of the day.

Ambition is, of course, the connection between the two worlds, and it’s the perfect term to describe Wright’s script. The voice of the young playwright these days often feels so trite, replete with well-worn observations about youth and angst, that it’s so refreshing when something truly original finds its way to the stage. Not only is the subject matter ambitious and challenging, the Roman plot of this play is actually infused with opera, composed by David Carl. This astutely-conceived choice solidifies the contrast within these two worlds, taking the audience through effectively drastic shifts in tone throughout.

But in either world, the script maintains a light, comedic touch throughout. Elagabalus is a fool, but the character isn’t built for laughs; there’s a tragic element to this sexually-open child suddenly given more power than he could be expected to control. Glen is suffering the same problem; he is trying to control this perceived love that he feels for Brick and keep him happy through the increasingly-dangerous sexual exploits. And while Glen’s injuries pile up (at one point, he is unable to sit comfortably), Wright still weaves his dark humor into the mix, avoiding any sort of “shock value” traps.

Samantha Shechtman’s direction compliments Wright’s fast, cinematic-style narrative structure, and the actors all adapt seamlessly. Crawford M. Collin’s Myrna is an exercise in fulfilling and breaking stereotype. Collins goes all-or-nothing with the “tough-as-nails” agent archetype, but she allows the character to drop her defenses here and there, especially when the well-being of Glen is concerned, and she surprisingly evolves into a lovely maternal presence.

As the battered assistant, Trey Gerrald breathes perhaps the most life into the play. Gerrald embodies an optimistic nervousness that contrasts perfectly with the other characters’ ruthless ambition. Glen is only ambitious about love, but Gerrald does not craft a victim; he instead shows us a character who convincingly argues that in order to be the strongest, you may sometimes need to appear weakest.

David Carl’s score for the Roman plot is a haunting jaunt. Relentless in its anxious tone, Carl is especially effective when he allows the music to reveal character. Two characters in particular shine through the music. As the Vestal Virgin, Teska’s solo reveals a child who, like Elagabalus, is struggling between desire and responsibility, and she becomes the tragic representative of all children who have had to grow up too fast. Elagabalus’s mother, played with a grounding compassion by Jessica Wagner, is the true hero of this story, torn between her maternal instincts and the ulterior motives of Elagabalus's grandmother, all complimented beautifully by Carl's music.

The scope of the play is huge, and simply getting it to the stage is an accomplishment in itself. But the world Wright and Carl creates is truly impressive, and it’s a call to playwrights to step up their game. If you’re looking for something truly original in a theatre scene in which you may feel, like me, that you’re seeing the same play over and over, RISE really gives you something to talk about.