A Picture of Autumn 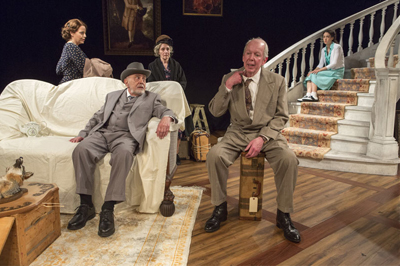 The cast of A PICTURE OF AUTUMN. Photo by Richard Termine.

BOTTOM LINE: A thoroughly moving and funny examination of the aging British aristocracy in post-war England amid a decaying centuries-old family manor.

The Mint Theatre presents the American premiere of British playwright N.C. Hunter’s first play (from 1951), discovering as they routinely do the work of an overlooked or forgotten scribe. Hunter was a hot property in London’s West End in the 1950s and '60s before falling out of favour when edgier writers came on the scene.

His themes of more than a half century ago of aging, regret and resisting change -- both as they apply to older generations and to once stately homes -- will resonate with American audiences even more now as Baby Boomers make up the fastest growing segment of the U.S. population. And with PBS’s wildly successful import "Downton Abbey" and its examination of the English upper classes, fans will also feel on comfortably familiar ground.

These themes are immediately on display as the curtain opens on the well attended living room of Lord Charles and Lady Margaret Denham (Jonathan Hogan and Jill Tanner), whose family has occupied the land since 1722. But the couple, who share the 18 bedrooms with his brother Harry (George Morfogen) and Nurse/dotty maid (Barbara Eda-Young), are getting up in years, spending their days cleaning, waging an unending battle against the weeds in the garden and trying to stay warm in winter without central heat and otherwise napping the hours away because they have nothing else to do.

Into their long-held routine comes eldest son Robert (Paul Niebanck), who has spent a number of years in Africa. Robert has returned with some urgency, buffeted by years of miserable letters from his mother detailing her many complaints about all the work the house entails, with a plan to help them unload the place and enjoy their golden years. He’s accompanied by his wife Elizabeth (Katie Firth) and teenage stepdaughter Felicity (Helen Cespedes), who bears more than a striking resemblance to Harry’s late wife. It is through the charming and poignant relationship that develops across the generations between Harry and Felicity that the heart of the play is found. Delighted by the occupants and seeing only the beauty of the old place, Felicity wants nothing more than to stay. Harry, as played brilliantly and to great comic effect by Morfogen -- who we are first introduced to when he brings a pigeon he’s shot to dinner -- seems renewed by Felicity’s presence. Seemingly the most attached to the house where he has lived since he was a boy, Harry is the one seized by the impetus to bring change into their lives while Charles, Margaret and Nurse are hesitant.

Although the subject matter does hew to a certain demographic, that certainly shouldn’t keep you away. The cast is uniformly great, especially the more senior leads (Jill Tanner, Jonathan Hogan and Barbara Eda-Young). Hunter, who mid-century critics called “the English Chekhov,” skillfully balances humour and pathos in this very worthwhile production.

(A Picture of Autumn plays at the Mint Theater, 311 West 43rd Street, 3rd Floor, through July 27, 2013. Performances are Tuesdays through Thursdays at 7PM; Fridays at 8PM; Saturdays at 2PM and 8PM; Sundays at 2PM. Additional performance on Wednesday, July 3rd at 2PM. No performance on Tuesday, July 2nd. Tickets are $28-$55. To purchase tickets visit ovationtix.com or call 866-811-4111. For more show info visit minttheater.org.)