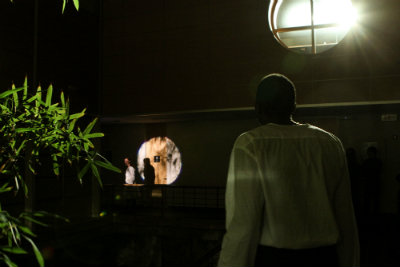 (From left to right) Jenny Seastone Stern and Julian Rozzell, Jr. in Yukio Shiba's OUR PLANET.
Photo by Julie Lemberger.

BOTTOM LINE: A unique journey through the life of a planet, set in the winding halls of Japan Society.

The one thing I love about theater (or, rather, one of the things I love about theater) is how it can take me to places I have never been before. Sometimes, that place is a different time, a different country, or a different world. There is nothing more satisfying than leaving a theater having felt transported. Our Planet—now appearing at Japan Society—is one such transitory play. During the course of the production, I felt like I was lifted off the ground and guided through a cosmic journey, which is remarkable since this play is pretty much all about Earth.

This production marks the U.S. premiere of this Japanese play (translated into English by Katsunori Obata and Mihara Obata; adapted by Aya Ogawa). It was originally written by Yukio Shiba and won the prestigious Kishidio Kunio Drama Award (Japan’s equivalent of a Tony Award) when the playwright was only 28 years old. This version of Our Planet is directed by Alec Duffy, the OBIE Award-winning founder and artistic director of Hoi Polloi, and is performed by two actors (Julian Rozzell, Jr. and Jenny Seastone Stern).

The most notable aspect of this performance is the playful and daring use of space: the production is staged throughout the entirety of the Japan Society building (a gorgeous arena).  Throughout the course of the show, the audience follows the actors from the lobby through six floors of galleries, offices, stairways and libraries and finally onto the stage of Japan Society’s theater (finally, the audience gets a chance to be onstage!)  It is a wonderful opportunity not only to lose yourself in the narrative of a show, but to also experience the beauty of this historic landmark building (the first in New York to be designed by a Japanese architect).

Shiba used Thorton Wilder’s Our Town as inspiration for Our Planet, and it is not difficult to see the influence of that work at play. Like its predecessor, Our Planet focuses on the universal themes of life, love and death, only on a much bigger scale. Our Planet depicts the lifespan of Earth—the actual planet—from its conception in The Big Bang to its inevitable demise in the flames of an expanding Sun.

Earth is personified in the form of Terri, a young girl growing up in Tokyo. Throughout the course of the play, Terri deals with the birth of a little sister, a complicated friendship with her neighbor Luna (the moon), and experiences the death of her grandmother (when asked why she must die, the grandmother explains to Terri “you were spinning too fast.”)  All the while, Terri’s journey is observed by a young student and his teacher, who watch from another planet ten thousand light years away.

All of the roles in Our Planet are portrayed by two very versatile and committed actors. Rozzell opens the show in the lobby, setting the tone with a wry “curtain speech” (“there will be one four-second intermission.”)  He then guides the audience in the darkness through the birth of the cosmos and the formation of Earth. Rozzell does a wonderful job in setting the fantastical, absurd tone of Our Planet and in making the audience feel comfortable and bold enough to follow him. He also gets some of the messiest work in the show: he wades through the lobby’s fountain and treks through the 2nd floor atrium’s bamboo garden. Rozzell rapidly shifts back and forth from character to character, acting out whole dialogues with himself, and when he puts on a schoolgirl’s skirt to play Terri, it’s disarming how adorable he becomes.

Rozzell interacts with Stern only at one point halfway through the show, when she appears as Luna. The two actors play out the course of the women’s life-long friendship in a single scene, and it is the most emotionally affective part of the show.  From that point, Stern takes over the narrative, expertly playing all of the characters just as Rozzell had, and it is through her bravery and fear that we witness Terri’s death.

Both actors are very adept at making giant leaps in character and at making such a bizarre story accessible. They help bring the grand vision of Our Planet down to a digestible size.  They are aided by Duffy’s supple staging. He utilizes the immense playing space of Japan Society to great effect. The minimalist scenic design of Mimi Lien further adds to the surreal journey of the play without overpowering the story. Its strength is like a backbone: it is not overly noticeable, but it is invaluable in its support. Jiyoun Chang’s lighting design succeeds in the unique challenges presented by the playing space. With an audience that covers the whole area, it is magical how Chang’s lights creep up on you or pop up seemingly from nowhere. Tei Blow’s music similarly adds subtle beauty to the show.

If there is a technical star of Our Planet, however, it would have to be the motion graphics of Nobuyuki Hanabusa. The Tokyo-based artist creates stunning visuals that paint the walls, floors, and ceilings of Japan Society in light. Hanabusa specializes in motion-based digital technologies that meld crisp graphics with a performer’s movement. The choreography of actors and pixels that results from this process is breath-taking. I have certainly never experienced theater the way I experienced Our Planet. It is an immersive journey that marries the beauty of theater with the beauty of architecture to form an unforgettable event.

(Our Planet runs at Japan Society, 333 East 47th Street, now through December 8, 2013. Performances are Thursdays at 7:30 PM, Fridays and Saturdays at 7 PM and 10 PM, and Sundays at 5:30 PM. This is a non-seated, standing and walking performance experience. No late entry. Limit 30 people per performance. Tickets are $28/$22 for Japan Society members.  Tickets are available at japansociety.org).