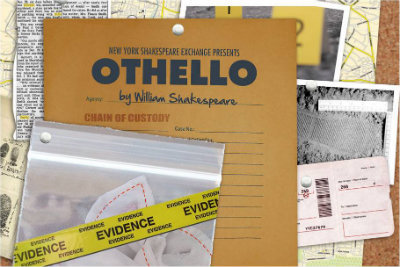 It is the green-ey'd monster, which doth mock

The meat it feeds on.”

Given the strong themes related to politics and race, Othello is an obvious choice to set in the current day. Director Cristina Lundy has placed her Othello in the age of stop-and-frisk and racial profiling. On a set that looks straight out of Spider-Man: Turn off the Dark (I mean that as a compliment), New York Shakespeare Exchange has created an excellent contemporary Othello.

By adjusting the characters’ occupations from soldiers to police officers, the production is able to draw more attention to the morality of the play, and highlight the theme of innocence and guilt. Lundy has given Iago an evidence board to track the relationships between characters as he crafts his plan. The beautiful and effective lighting by Daniel Winters, and the dark web-esque cityscape by G. Warren Stiles, both highlight this.

The company is led by the extremely capable Terence MacSweeny as Iago. Iago must be charming and have a certain magnetism that leads all of his colleagues to trust him and believe that he is honest. MacSweeny portrays this aspect of Iago with ease, and it is easy to see how he manipulates everyone.

Anna Van Valin as Desdemona is equally strong; She gives a commanding yet vulnerable performance, and it is easy to see why everyone is attracted to Desdemona. Van Valin, along with Carey Van Driest as Emilia, bring the play to its emotional close with ease. In what is usually a feast for the male actors, the ladies take over the show in the second half, stealing the show from the men. They give well-crafted, fierce performances of these famous Shakespearean women, drawing attention to the importance of jealousy. We should look forward to great things in the future from both.

Keldrick Crowder is a good Othello overall, yet his performance of some of the monologues veers towards being too melodramatic. Additionally, I would have liked to see him work up to the frenzied paranoia that Othello has about Desdemona and the “affair” by the final act, rather than seeming to start from that level of paranoia and plateau.

Additional strong supporting performances came from David Price as Roderigo, Josh Jeffers as Cassio, and Katherine Puma as the Duke of Venice. Additionally, the music of composer Shane Parks is nicely used to set the atmosphere.

Placing the play in a police station mostly works to the advantage of the production, though it is a little confusing when Othello comes home from “war” as a captain and not a solider. The action is well staged around the set, with the exception of several characters using the wooden platforms as pulpits for monologues, which may draw audience members out of the action as it did for me.

Overall, I found this production of Othello to be solid and enjoyable, due largely to the direction and adaptation by Cristina Lundy and the dramaturgical work by Maria Mytilinaki. The production successfully placed a contemporary lens to Othello and I would recommend this production to anyone.

(Othello plays at the Hudson Guild Theater, 441 West 26th Street, between 9th and 10th Avenues, through November 2, 2013. Performances are Tuesday at 7 PM, and Wednesday through Saturday at 8 PM. There is an added performance on Sunday October 27 at 2 PM. Tickets are $18 and can be purchased at brownpapertickets.com. For more information, visit www.shakespeareexchange.org.)