Off Off Broadway, New Play
Runs through 8.31.13
Theater for the New City, 155 First Avenue 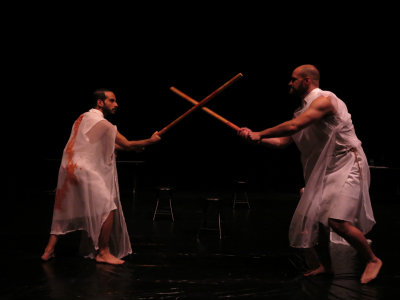 Gabe Gonzalez and Daniel Sterba in ONCE AND FUTURE. Photo by Jingxi Zhang.

BOTTOM LINE: A highly challenging piece that uses the legend of King Arthur's Round Table to explore nontraditional modes of storytelling.

One of the wonderful, if occasionally confusing, things about theatre is that there is no consensus, even among its practitioners, on what it should be. The fact that offerings as wildly divergent as Cyndi Lauper’s Kinky Boots and Alan Cumming’s one-man Macbeth were both produced on Broadway last season is evidence of that. Some folks want to see singing, dancing, and (as I once overheard a woman in a Broadway house say) “pizzazz.” Some want passion and drama. And some want something that confounds any and all expectations they might have about what happens on a stage.

For that last group, there is Once and Future, a play that begins with classic, familiar material and infuses it with a healthy dose of the uncanny. A cast of five actors, flanked by a musician, a narrator, and two additional performers, enact a series of tales from Le Morte d’Arthur, the Bible of Arthurian legend. The stage is all but empty, save for a circle of stools at center; the cast is costumed in simple white garments suggestive of medieval England or ancient Rome. The only props are long wooden poles that stand in for swords and lances; all other objects are pantomimed.

Over the course of 75 minutes, the cast performs a grab-bag of episodes from the history of Camelot, specifically focused on how the knights of the Round Table are torn apart by the quest for the Holy Grail. The actors, four male and one female, play different roles in each story – knights, kings, ladies, mysterious hermits – without regard to gender. Characters who appear in more than one of the tales are played by different actors in each one. Indeed, almost nothing about this production remains constant – both the order of the episodes, and their casting, change from performance to performance based on the random order of a deck of cards. If you’re wondering if that element of uncertainty and instability reflects the themes of the play, the answer is yes.

The minimalist nature of the production may strike the viewer as bold, alienating, or even comical, depending on the moment. The actors make no attempt to differentiate themselves as they cycle through their scenes; their performances are like Renaissance paintings come to life. Sir Galahad might be a bearded man when first we meet him, then a petite woman in the final scene, but there will be no discernible change in his character beyond the physical aspects.

Needless to say, audience members who go into Once and Future expecting something along the lines of Camelot will be gravely disappointed. Director Douglas Eacho, who also adapted the text, is totally uninterested in any mainstream notions of theatrical pleasure. However, he and his company do create moments of austere beauty through the play’s twelve scenes, with the narration and musical accompaniment adding a hypnotic quality. Like King Arthur’s knights, they seem to be on a quest for something pure, otherworldly, and transformative.

(Once and Future plays at Theater for the New City, 155 First Avenue between 9th and 10th Streets. Remaining performances are Thursday August 29 at 9PM, and Sunday August 31 at 8PM. Tickets are $15 and are available at dreamupfestival.org or by calling 212.868.4444.)