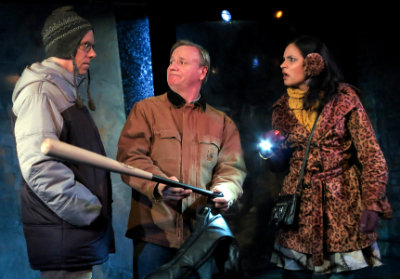 BOTTOM LINE: This play succeeds in being immensely funny thanks to a gifted cast as well as a clever script.

As a born and raised Minnesotan of Scandinavian descent, I was curious to see C. Denby Swanson’s new play The Norwegians which lampoons Minnesota, Norwegian Americans, and the drastic measures one will take in the face of heartbreak. However, to truly appreciate this play’s humor one might have to have spent some time in this Northern state or at least be familiar with the standard caricature of Minnesotans.

The play focuses on Olive (charmingly embodied by Veronica Cruz), a mild mannered Texan who finds herself lost and heartbroken after being dumped by her long-term boyfriend. Olive makes fast friends with the mentally unhinged Betty (Karla Hendrick), a transplant from Kentucky, who confesses that she is also nursing a broken heart which she intends to mend by having her ex killed by hitmen. Betty claims that her time suffering through Minnesota winters is what has rendered her evil. “The cold just begins to affect the soul. You know? If you’re not from here, raised here, indoctrinated in it. Your first Minnesota winter changes you. Makes you a little mean,” she says. Through Betty’s dark influence Olive decides to hire the Norwegian hitmen to kill her ex-boyfriend as well, figuring that once he’s dead the pain will finally stop. In a prolonged scene intercut with flashbacks the two towering blonde hit men, Tor (Hamilton Clancy) and Gus (Dan Teachout), interrogate Olive as to how she got their number, promising a gift card to whomever referred her. The two make a few cracks about the hallmarks of Norwegian mindsets, noting that they will never brag, show off, or get angry, and lack a basic comprehension of irony. When Olive finally offers up Betty’s name to the two men, the two become upset, proving that there is more to this dark plot than meets the eye.

The mix of murder with Minnesotan dialects in the deep of winter brings to mind the Coen brothers' 1996 film Fargo, which evokes a similar tone. Although in comparison this play isn’t nearly as dark (nor as gory). Much of the humor stems from the juxtaposition of “Minnesota Nice” with the flippant treatment of murder. How can such a nice woman hire two friendly-seeming men to commit murder?

That said, most of the jokes are references to caricatures of Minnesotans (I have never actually heard anyone say “uffda,” nor am I exactly sure what “hotdish” is, but I do know that those are hallmark jokes for people from the state). Most likely, the jokes will hit hardest with those who (like playwright Swanson) have spent time in Minnesota or the surrounding states. Betty’s long embittered speech about the cold, painful winters trapped indoors and how “you gotta find a lover before the first freeze or else it’s just too late, you’re iced in for a very long time, all alone,” seemed to hit home with me a bit more than the other audience members around me.

The cast pulls off the material well, mixing a perfect balance of zaniness and seriousness, and director Elowyn Castle seems to have done a skilled job of guiding the actors to make the most of each scene. Karla Hendrick is particularly funny as Betty with her overly intent expression that imbues her every line with a sense of insanity, especially her monologue about why she distrusts Norwegians. In both plot and in subject Swanson has hit upon some rich comedic material which I feel she could have done more with as a few particularly humorous moments are rushed through or not fully taken advantage of. That said, The Norwegians is a darkly funny play whether you have visited the land of ten thousand lakes or not, as heartbreak is an experience that crosses state lines.