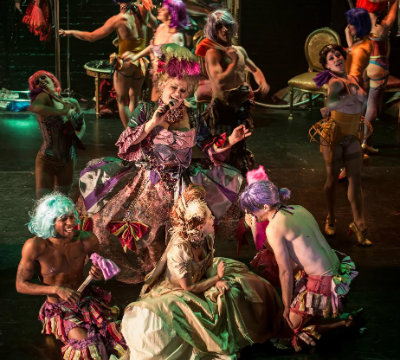 BOTTOM LINE: A dazzling and daring downtown burlesque of The Nutcracker.

You need to go see Company XIV’s Nutcracker Rogue (unless you’re bringing children or you’re a prude). The highly designed, ingeniously staged, and endlessly entertaining reimagining of The Nutcracker is decadent, debaucherous, and delicious. Austin McCormick continues his tradition of smart, dazzling, and highly theatrical dance.

Nutcracker Rouge takes the traditional Nutcracker, treats it like Moulin Rouge, decorates it with baroque movement and styles, and turns up the raunch. You’ll be enticed by the glitz and glamour but sold by the incredibly talent of the performers and the high artistry of the show. Ninety quick minutes of singing, dancing, acrobatics, and costume changes transport you into McCormick’s vivid vision. The production is so enthralling that one can become lost in the world of pasties, corsets, cross-dressing, glitter, wigs, fetishwear, and flesh. The good news? You’ll like being lost!

The show features text by Jeff Takacs adapted from E.T.A. Hoffman’s The Nutcracker and 19th century poems. Jeanette Yew lends rich, dramatic lighting, and Zane Pihlstrom (who I now think is a genius) designed the metatheatrical set and opulent costumes — the garb is art in and of itself! Nutcracker Rouge might be the most beautiful show you’ll ever see.

Shelly Watson and Jeff Takacs serve as brassy, trashy hosts (think a drag version of the Thenardiers), guiding the audience’s journey through the evening. Watson’s ghoulish hilarity is overshadowed only by her lush and versatile voice while Takacs makes sinister sexy. Even as the mostly spectating Marie-Claire, Laura Careless’s undeniable magnetism permeates the stage, and when she finally gets to dance the audience is done for! But the show runs on the sweat and star quality of the phenomenal ensemble of intensely talented and undeniably gorgeous men and women: Rose Bonjo, Marisol Cabrera, Katrina Cunningham, Courtney Giannone, Molly Griffin, Jacob Karr, Nicholas Katen, Kana Kimura, Nicolas Maffew, Benn Mendoza, Tyler Phillips, Davon Rainey, and Alison Ulrich. The applause for Katrina Cunningham’s velvety vocals threatened to stop the show, and Davon Rainey shined in scene after scene with his sass and sinews.

This is an incredible show by an incomparable company, stunning to look at, gorgeous to watch, and unfailingly entertaining. The audience stood up and cheered, and you will too!

(Nutcracker Rouge plays at Minetta Lane Theatre, 18 Minetta Lane between MacDougal Street and Sixth Avenue, through January 12, 2013. Performances are Mondays through Saturdays at 8PM and Sundays at 7PM with no performances on December 8th, 15th, 24th, and January 1st. Tickets are $39-$79 and are available at ticketmaster.com or by calling 1-800-745-3000.)