Off Broadway, New Plays
Runs through 12.1.13
Theater for the New City, 155 First Avenue 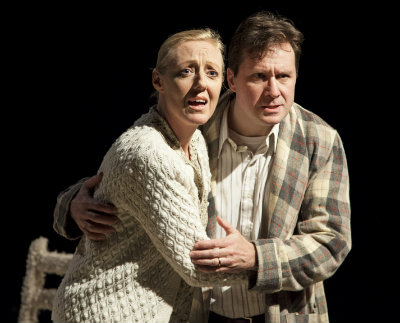 BOTTOM LINE: A duo of Norwegian theatrical gems get their due on this side of the Atlantic.

I, like most Americans, know very little about Norwegian drama. I suspect even the most seasoned New York theatergoer has not had much experience with Scandinavian theater outside of the odd Ibsen or Strindberg revival. Fortunately, Ego Actus and Scandinavian American Theater Company have joined forces to fill this very specific void and school us on our own ignorance. Norway Plays: Drama Beyond Ibsen, appearing now through December 1st at Theater for the New City, is a double feature of two one-act plays by a pair of Norway’s most acclaimed playwrights. It provides an excellent opportunity to experience a theatrical perspective unique to American audiences.

Fredrik Brattberg’s The Returning focuses on a middle class couple (Ingrid Kullberg-Bendz and Andrew Langton) who are reeling from the sudden disappearance of their son. The Mother fills her days with knitting and the Father becomes obsessed with the neighbors’ dog. They do eventually make peace with their son’s apparent demise — as they happily tell us — and their lives eventually return to a sense of normalcy. Until one day when an unexpected visitor arrives at their home.

More, by Maria Tryti Vennerød explores the murder of a young woman named Benedickte (Skyler Volpe) by her best friend Ida (Christina Toth). As Ida is grilled by the police (Chevy Kaeo Martinez and Eric Schjerven) the case is dissected by the media (represented as a literal circus by Andrea Cohen Spiegler and Ioan Ardelean). Both the police and media become obsessed with the brutal crime, though neither are particularly interested in the truth.

Both plays share a lot of similarities. Both center on death, both have very cynical views of human responses to tragedy, and both are darkly comic and at times absurd. The Returning, as directed by Henning Hegland, has a narrower focus than the more universally themed More. Brattberg keeps the action centered on the family, who reveal greater levels of selfishness as the play goes forward. We are first clued in to the central couple’s insincerity through the set (meticulously designed by Starlet Jacobs) which is covered completely in immaculate beige wool. It gives the atmosphere a false sense of warmth; everything looks clean and inviting but far too pristine for anything messy to exist. Anyone who owns off-white carpets cannot be well equipped to deal with human drama.

More, on the other hand, tells its tale in much broader strokes. The play begins with the crime in question (enacted through a haunting pas de deux choreographed by Shannon Stowe) and then ripples out through national opinion. Everyone wants something from this crime: the police want a confession, the media wants sensation, the general populace wants a scapegoat for societal ills. Director Joan Kane employs a wide variety of theatrical conventions to evoke the absurdity of the story. The media is presented as two sexy, glittery clowns while the police officers engage in gritty good cop/bad cop dynamics. Everyone dances at some point. This might be the danciest show about teenage homicide in this or any other season. The striking set (also designed by Jacobs) is swathed in acres of pale blue satin. It looks like the performers are acting in the sky.

As the central couple of The Returning, Kullberg-Bendz and Langton have an easy report and lived-in chemistry with each other. Their natural, unforced acting make the later events in the play all the more shocking (and hilarious). Kristoffer Tonning does impressive work in the surprisingly demanding role of the visitor. More, meanwhile, boasts an eclectic and physically engaging ensemble. Spiegler and Ardelen hold nothing back in their scene chewing bits while Martinez and Schjerven give the drama weight and gravitas. As the victim, Volpe injects her performance with surprising splashes of menace and seduction. Best of all is Toth, who crafts a complex and vulnerable character in what could have been one-note and cloying part.

Norway Plays: Drama Beyond Ibsen is an evening of theater that is difficult to like, but impossible not to love. I’m grateful to have experienced drama in a way I wasn't previously familiar. Please take a dip into these unfamiliar waters. You’ll be glad you did.

(Norway Plays: Drama Beyond Ibsen plays at Theater for the New City, 155 First Avenue, now through December 1, 2013. Performances are Tuesdays through Fridays at 7PM; Saturdays at 2PM and 7PM; and Sundays at 2PM. There is no performance on Thanksgiving, 11/28. Tickets are $30, available at 800-838-3006 or at www.norwayplays.brownpapertickets.com.)