No Man's Land / Waiting for Godot 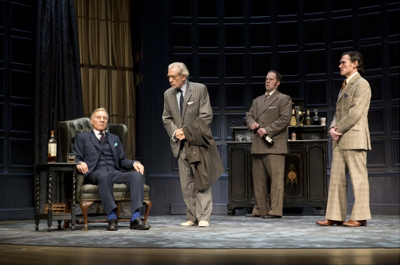 BOTTOM LINE: Two wonderful revivals in rep, with performances well worth the price of admission.

Sometimes talent graces New York stages that makes you stop and recalibrate your impression of good acting. Some actors are so beyond the expected level of talent that watching them work becomes transcendent. Ian McKellen, Patrick Stewart, Billy Crudup and Shuler Hensley -- the four actors who comprise the casts of No Man's Land and Waiting for Godot -- nail their characters with such effortless charm that you feel lucky to witness it. And under director Sean Mathias' knowing hand, each moment seems carefully constructed to reveal the perfect balance of humor and pathos.

Though both No Man's Land and Waiting for Godot offer brilliant productions, they are still plays written by Pinter and Beckett, respectively. Those who welcome stylized theatre with absurdist observations on relationships (and little closure about what those relationships may be or what the individuals may be doing) will have a blast. But a fair warning to those who prefer their theatre on the more easily digestible side: you have to turn your brain on to critically engage with these plays. What happens on stage is effectively what happens in your head -- you have to go to it, as much as it comes to you. But anyone willing to spend time with these productions will be grateful for the experience. 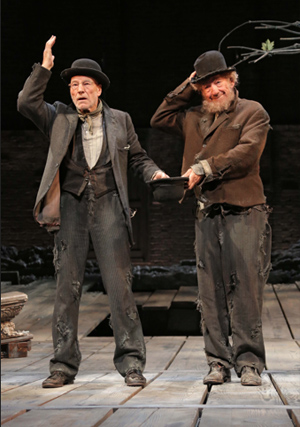 It's remarkable how well these plays pair with one another. Performed in rep (Godot performs Saturday through Wednesday, No Man's Land Wednesday through Saturday), they accentuate the distance between people, even when they are in the same room. Existential questions are at the core of these inquiries, yet a lack of details keep the audience always at arm's reach. In both of the plays, McKellen and Stewart are the older gentleman and Crudup and Hensley take on the more side-kicky roles. But the disparity between the plays lets each actor explore two vastly different characters, which must be great fun for them, and probably has something to do with why spirits are so high on stage.

Mathias, McKellen and Stewart are Brits who bring to Broadway a fine-tuned sense of humor and a massive physical vocabulary. Hensley and Crudup are able counterparts. Together these folks have given life to two poetic plays back in New York at just the right time. Something "classic" must be in the air, as just a couple blocks away are Twelfth Night and Richard III, also performed in rep, and starring the incomparable Mark Rylance. Tony voters will have their work cut out for them this season.

Patrick Stewart and Ian McKellen in WAITING FOR GODOT. Photo by Joan Marcus.