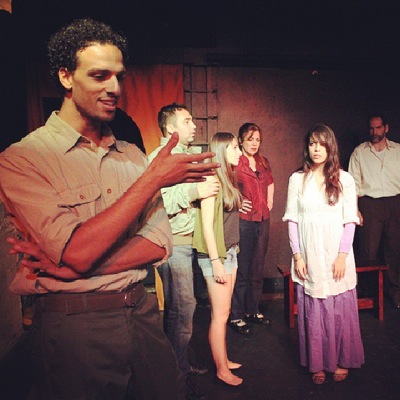 BOTTOM LINE: This piece, about Israeli-Arab relations, follows two different families linked by contested land and forbidden love, both of which will undo their preconceptions before the lights go out.

Today’s news is replete with the kind of talk you’ll find in Israela Margalit’s stirring drama Night Blooming Jasmine; the only thing missing in the news is the actual faces. Margalit, therefore, propels us into a world of the front page by taking us behind the scenes into two emblematic households: a moderate Jewish home with two army-clad sons and a traditional Arab home housing a male freedom fighter and a headstrong daughter. Both homes represent important powder kegs in the conversation and breakthrough of peace in the Middle East. Margalit, accompanied by the tense-ridden direction of Artem Yatsunov, set the match with an unlikely love story between the eldest Jewish son, David, and the scholarly Arab daughter, Jasmine. Their exchange underscores the political tension between the two groups. It’s always the thing that issues of love can represent those of war with striking precision. The play oscillates between the two houses like a dance, weaving in and out of anecdotes about birds of a feather and the reality of raids. The piece is as much news as it is song. Margalit’s love story to a war torn land is a bedrock for future tales of its kind. This is just the beginning of the conversation.

Yatsunov’s direction is an intriguing combination of sinuous and stable: Joseph Barbarino’s Yusuf seamlessly transforms into his Jewish counterpart Michael with the slightest change of garb and accent, expertly delineating character. This is the way for each role: Rita Rehn’s soft Ruth/Surka shifts with a kerchief as does Shannon Sullivan’s playful Rachel when she becomes the steadfast Mahalla. The habitually quarrelsome brothers Jamil and Ibrahim (Nuah Orzyel and Tony Knotts) alternate between Muslim and Jewish siblings by losing devious scarves; Michael Twaine is equally nefarious in his roles as Zev and Abdul.

The piece is stabilized, however, by the stolidity of the lovers, Jasmine and David, played engrossingly by Alissa Razzano and Ari Stachel. Stachel enters this role as a replacement having only rehearsed a week before opening. It’s a feat mediated by a wonderfully relaxed and confident portrayal, however. He’s a poetic hero with broad shoulders and authentic bravado. Look out for him in the future. Razzano is equally composed; showing that beauty can be simultaneously smart when she flashes fiery quips and breathtaking smiles. Stachel and Razzano can’t cool the fiery stage as their impassioned love also steams through the second act. The script is dense, ostensibly carrying fourteen voices and arcs, yet it hardly condescends to education or a novel. Rather, it breathes. Take the first time David and Jasmine meet: their encounter is canopied by a striking sunset, soliciting thoughts on beauty in the face of war. We never forget, happily, that these are families, or teens, or parents struggling with an indomitable outside force.

On a physical note, UNDER St. Marks is a pleasant venue for this work. Being subterranean only heightened the weight we felt the whole night. I’d love to see this production gain a wider audience. If not only for its deft and timely portrayal of Israeli-Arab relations, Margalit’s work is tender and real. At play’s end the resolution doesn’t try and reconcile every bit of drama, making it more satisfying in fact. Such an ending tells us that “resolved” really doesn’t create happiness, just more questions to answer.

(Night Blooming Jasmine plays at UNDER St. Marks, 94 St. Marks Place, through September 15, 2013. Performances are Thursdays through Saturdays at 8PM; and Sundays at 7PM. Tickets are $18 and can be purchased at smarttix.com.)