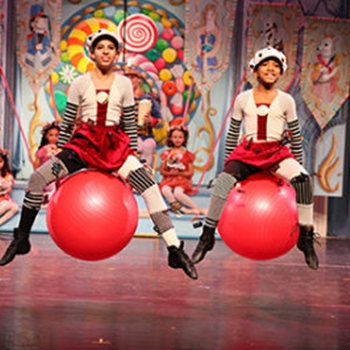 BOTTOM LINE: Children are the most honest audience. From this sold out house, I heard oohing, ahhing and giggling. I’d say it was a success.

Keith Michael had conceived a Nutcracker for NY Theater Ballet performed from 1985-2010. This is his second version which suggests that he is a choreographer who wants more. His is an abbreviated Nutcracker with incredible use of transitions, percussive elements, and witty twists on the sections with just five main characters. The significantly shorter music was arranged very well and the scenes were perfectly coherent without the aid of archaic pantomiming.

The performance starts off with the director, Diana Byer, personally welcoming everyone with a demonstration of the lighting and how it affects the look of the dancers and the sets. It broadens the sugar plum visions of just being a ballerina onstage and allows the children to dream of working backstage. I enjoyed the chamber ensemble feeling of Florence Gould Hall. It is a much more intimate way to see The Nutcracker, rather than going to a huge theater and sitting up in the nosebleed section, which I remember as a kid. The dancers were enjoying themselves and were light on their feet and with their tricks, but I appreciated their relatability and versatility.

The sets by Gillian Bradshaw-Smith transform from a grandfather clock to a throne in the last section. There is a doorway frame that seems to catch the most picturesque moments as if to literally frame them. It is a good use of the stage and there is a feeling of plenty although there are so few cast members.

The five leads are well cast. Elena Zahmann dances the role of Marie, Seth Ives dances the Nutcracker Prince, Mitchell Kirby is a zany Drosselmeyer, Rie Ogura dances both Mother Stahlbaum/Sugar Plum Fairy and Choong Hoon Lee dances Father Stahlbaum/Cavalier. The children in the production are dancers from the Ballet NY school. Marie and her Nutcracker Prince dance to music of the snow pas de deux. It is a wonderful and logical solution to the scale of the production. The Mother and Father Stahlbaum later became the Sugar Plum Fairy and Cavalier. That makes sense since they seem to be the guiding and comforting light in both worlds.

The mouse queen, a new spin on the evil Mouse King had a long tail that many little mice held onto. The costumes designed by Sylvia Taalsohn Nolan were incredibly well done from the tick tocks who keep the clock wound in their rags, to the mice in hippy polka dotted pants, to the calvary with little legs sewn on their horses making them seem like stocky soldiers. And where the costumes were meant to be flattering and beautiful, they were.

The Land of Sweets is always exciting to see. Among some of the highlights were the Chinese Chopsticks. The dancers had chopsticks and created another sound to the Nutcracker score and it was an inventive use of the props and music as they floated through them as they thrust them down into the floor. They also used them as swords. The Russian Boules were the younger dancers throwing bouncy gumballs that had the same feel of the standard Nutcracker version where dancers do incredible jumps with gusto. At parts, they rolled across the stage on the balls with precision. I could hear many children talking about recreating this at home and many parents heaving sighs. The flowers and snow scenes included men and used students from their school. The Marizipan Shepardess and the feature for the children as fluffy little sheep was just the right amount of disgusting cuteness. Drosselmeyer did come back to dance with the Harlequin and Arlequina to the section used sometimes for a “Mother Ginger” children’s section. It has a clown feel and Mitchell Kilby as Drosselmeyer is an outstanding character dancer and brings comedy to the Land of Sweets. Had I not seen the Nutcracker so many times, I might not have appreciated the nuances, but hearing the reactions of the children and the delight in their eyes made me love the atmosphere it brought into the house.