$30 for adults, $25 for students/seniors. Audience members wearing 1920s costumes can purchase tickets for $20.

The Man Who Laughs

By Kiran Rikhye; Inspired by The Man Who Laughs, by Victor Hugo
Directed by Jon Stancato
Produced by Stolen Chair 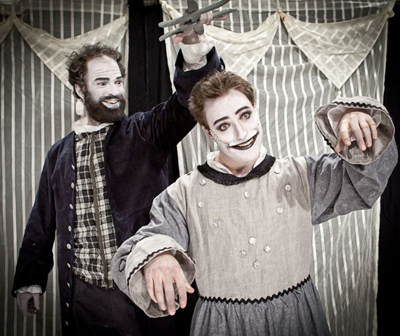 Jon Froehlich and Dave Droxler in THE MAN WHO LAUGHS. Photo by Carrie Leonard.

The Man Who Laughs is billed as “a live silent film for the stage.” It’s an amazing concept — a totally pantomimed story, with short descriptive blurbs periodically projected onto a back screen — performed to a riveting original piano score played by composer Eugene Ma. The sets, designed by Michael Minahan, are fantastic and special effects — the lightly falling snow is particularly effective — are enhanced by Daniel Winters’s lighting, Aviva Meyers’s props, and the make-up skills of Stephanie Cox-Williams and Jaclyn Schaefer.

The 90-minute production is loosely based on Victor Hugo’s 1869 book of the same name, a story written during the author’s years of political exile from France. In this version, it is 1686 and Gwynplaine (Noah Schultz portrays him as a youth and Dave Droxler beautifully enacts the adult character) has been disfigured by a band of ruffians called Comprachicos, hooded thugs who grabbed Gwynplaine off the street and knifed him so that his face now appears to be in a permanent smile. He seems to be grinning in an expression that calls up Batman’s nemesis, The Joker.

The goal of the Comprachicos? As the name implies these boy buyers are eager to display the newly-created “freak” for fun and profit. Not surprisingly, Gwynplaine hates his new life and eventually escapes. His frantic meanderings — at this point he is still an adolescent with no idea where he is or in what direction to run — take him through unspeakable hardships but also lead to the discovery of a tiny baby lying on the side of a road, near frozen from cold. He rescues the infant and, clutching her tightly, continues looking for respite.

Enter Ursus (Jon Froehlich), a kindly traveling ventriloquist who agrees to let the pair stay the night in his modest home. Then, as often happens with the soft-hearted, the next thing Ursus knows 19 years have passed. Dea (Molly O’Neill) is now a lovely woman, and despite being blind, she and Gwynplaine have become an integral part of Ursus’s roadshow. And although they are far from materially rich, the three have what they need and it is clear that they have become deeply committed to one another. It’s a decent life.

Gwynplaine, however, wants more. He is increasingly disturbed that people titter when they see his face and that no matter what he is feeling his perpetual smirk-or-maybe-snicker is misread as happiness or glee. His despair — acted with the maudlin affect of an over-the-top silent film — is palpable and his desperate quest to find someone beyond his chosen family who can read his moods leads to mayhem and worse. Needless to say his interactions with The Duchess Josiana (Rebecca Whitehurst) and her paramour, The Lord David Dirry-Moir (Raife Baker), end badly.

It’s a sad tale about human superficiality, a tale that is rife with pathos, melodrama, and occasional humor. While the story itself isn’t particularly compelling — I kept wishing for something shocking to happen — the staging, acting, and overall direction are so ingenious that this barely registers. Yes, The Man Who Laughs is an old story. Nonetheless, in displaying the tears of a clown the play reminds us that most people are more complicated than what we see at first glance. Indeed, it is folly to assume that we know what someone else is thinking, experiencing — or even laughing at.

(The Man Who Laughs is being performed at Urban Stages, 259 West 30th Street, through February 24, 2013. Performances are Thursdays through Saturdays at 8PM; and Sundays at 2PM. Tickets are $30 for adults, $25 for students/seniors. Audience members wearing 1920s costumes can purchase tickets for $20. Tickets can be purchased at stolenchair.org or by calling 212.868.4444.)