My Machine is Powered by Clocks

By B. Walker Sampson; Directed by Matt Stone and Calla Videt; Choreographed by Jeff and Rick Kuperman
Produced by Sightline
Part of Ice Factory 2013 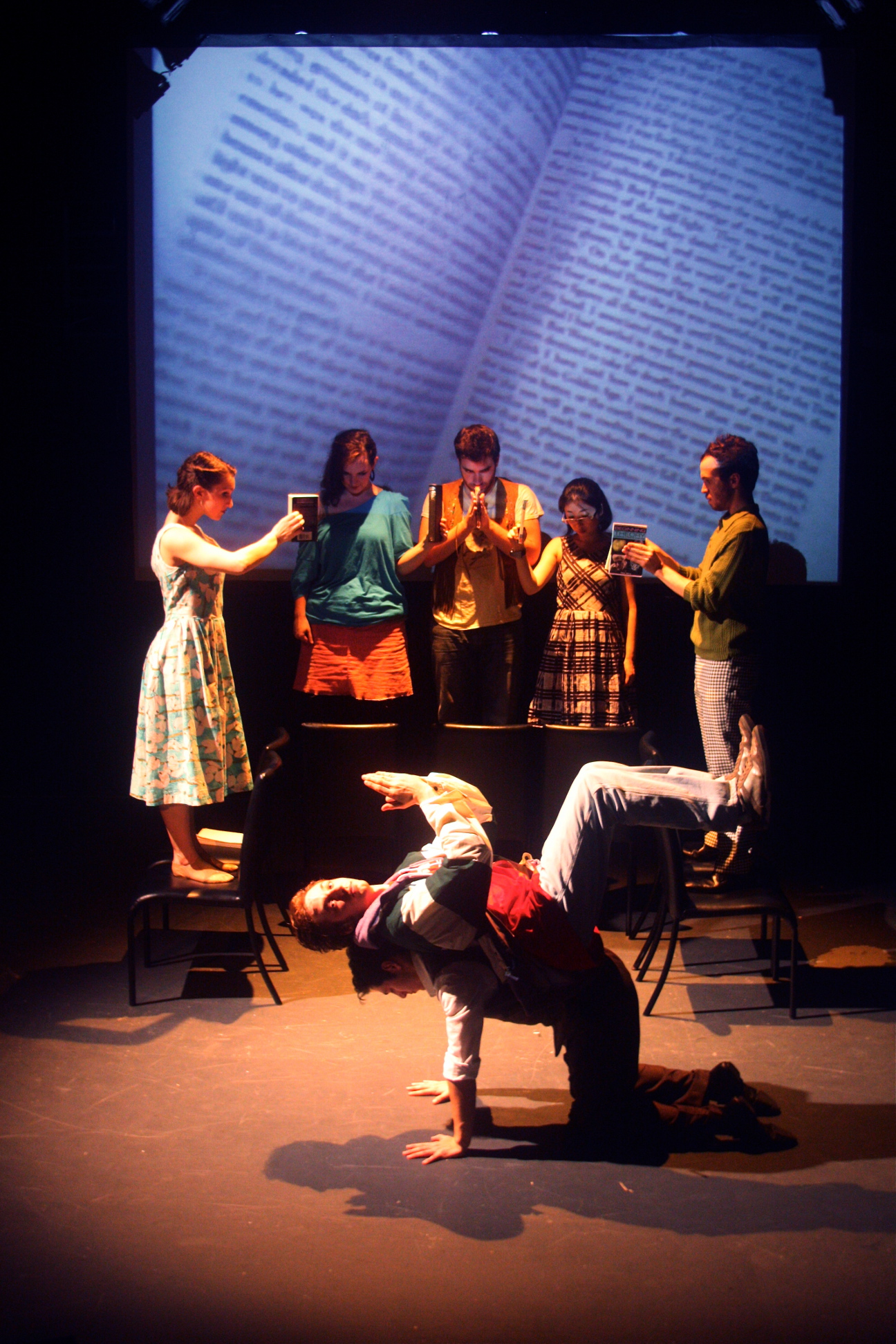 Cast of MY MACHINE IS POWERED BY CLOCKS. Photo by Lauren Rayner.

My Machine is Powered by Clocks begins with a quick and lively pace: a creatively conceptualized moving set composed of actors and dancers unfolds the action to the audience. “The day is July 3, 2013, time is 7:15...” It was very refreshing to watch the plot unfold in a tightly spun tapestry of choreography, stage directions, lights, sound and visuals.

The plot poses an intriguing idea: Imagine a time when time travel is relatively common. A future can be seen, a past can be changed. How would that change our lives? How would that change the way we control our or lives? All of a sudden, there are multiple incarnations of the same character traveling through time, and multiple events happening to the same character at the same time. Like in Owen's story, on August 13, 5036 at 2:45pm, he is eating a bag of potato chips, but also windsurfing in another life.

The play is four intercepted stories taking place probably at the same time in different “times.” The characters are all time traveling, so it doesn’t really matter. There is the meddling Grandpa, the obsessive time traveling time machine inventor Halley, the loving sister Audrey who tries to protect her brother Owen from a bus accident, and a woman named Glover trying every possible way to change the life course of a man named Jeremy, who she had met in her life before everything turned to shit.

Given the power, can we change the trajectory of our life? Audrey tries every scenario she can think of to stop her brother from boarding a doomed bus. Glover goes back in time disguised as different people to interact with Jeremy and tries to change his life but only to find that they are to meet regardless.

The play has many humorous and witty moments; the stage direction by Calla Videt and choreography by Rick and Jeff Kuperman cleverly executes these ideas. The fantastic cast make the piece comes to life with constant comic energy, like when Halley arrives to give a talk to a classroom of university students, only to find a class full of fourth graders on career day. Or, in another scenario when she wakes up, no longer in 1900 Paris, but surrounded by cavemen, along with unexpected pets.

The flow from scene to scene is seamless, though my only complaint is the transitions are too rushed, sometimes dialogue is spoken too quickly making it difficult for the audience to follow the fragmentary plot development. The action-packed stage movements are filled with great ideas, but I wish they could linger longer, to leave room for contemplation, and for the audience to absorb the beauty of each detail. All in all, it is an entertaining evening and the dynamic cast is well worth seeing.

(My Machine is Powered by Clocks is part of the 2013 Ice Factory Festival playing at the New Ohio Theatre, 154 Christopher Street between Greenwich and Washington Streets.  Remaining performances are Friday and Saturday, July 5th and 6th at 7PM.  Tickets are $18 and $15 for students and seniors, and can be purchased online at www.NewOhioTheatre.org or by calling 888-596-1027.)