Tickets can be purchased online at beautifulsoup.showclix.com

Off Off Broadway, Play Revival
Runs through 2.10.13
The Connelly Theater, 220 East 4th Street 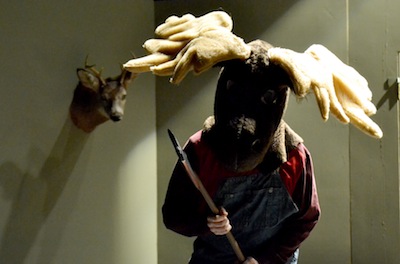 BOTTOM LINE: This revival of the 1983 Broadway flop, famously skewered by Frank Rich, does not offer much that is good, or even memorably bad. It’s just incomprehensible and boring – the worst sin of all.

As far as I can tell, the single reason the Beautiful Soup Theater Collective took on Arthur Bicknell’s infamous flop Moose Murders is because the reviews of the original production were so bad that it made the piece sound irresistible. Frank Rich mused about the moose heads that adorned the set: “one cannot rule out the possibility that these particular moose committed suicide shortly after being shown the script that trades on their good name.” Doesn’t that make you wish you had been there? Lest Rich think he had escaped Moose Murders once and for all, he is sadly mistaken: his book Hot Seat (his collected theatre reviews for the New York Times) is clearly visible onstage.

On occasion, a previous flop had been resuscitated in more recent years to become something not just watchable, but even worthy; witness last season’s Carrie. Unfortunately, Moose Murders is no Carrie. This is not to say that the basic idea – to combine a ridiculous farce with an Agatha Christie-style murder mystery – is itself to blame. Apparently, Bicknell “significantly” rewrote and revised his script for this production. That this is the revised script is almost impossible to fathom. As ridiculous as both farce and murder mysteries can seem when compared to “real life,” each genre has its own internal logic. This is not the case here. People enter and exit the stage for no apparent reason, characters do things that make absolutely no sense, and the requisite plot twists are unmotivated, unearned, and uninteresting.

It is unfair, however, to place all the blame on Bicknell; the director, designers, and most of the cast are equally to blame. While I sympathize with off-off productions done on the cheap, Dennis DelBene’s set design is painfully inadequate: there is only one playing space, death for farce and murder mysteries alike. It is also confusing – why does the lobby of this lodge look like a suburban living room? Most of the actors (some of whom are horribly miscast) give sub-par performances, with a few memorably bad stand-outs. Only Brittany Velotta (as a screechy lounge singer) and Caroline Rosenblum (as a martini-loving tap-dancing twelve-year-old) rise above the mediocrity. Although both characters are annoying, at least these two actors have a compelling stage presence.

But it feels churlish to come down too hard on the actors, since they were so clearly on their own here. Steven Carl McCasland’s direction is not just inept, it is non-existent: the actors meander around the stage with no motivation whatsoever, and the sluggish pacing makes the play feel even more interminable. In his program notes, McCasland writes that there is “no camp” in this production. And that is exactly the problem.

McCasland also plays the blind Howie Keene, and in doing so, gives one of the worst performances of a blind character I have ever seen. Keene is somehow able to walk around furniture and other people without ever feeling his way with his hands or tripping (except once, when there is nothing to trip over). In other words, McCasland directs the show as if he were blind, yet plays a blind man as if he could see. This pretty much sums up the entire production.