Purchase tickets at the door or online at terranovacollective.org 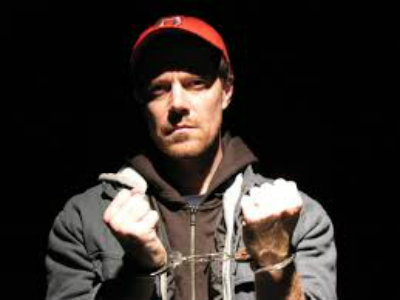 BOTTOM LINE: Through this show Milligan sends a powerful message about the state of the health care system in America.

The political agenda running beneath the Mercy Killers is an obvious one, but it’s also an important and relevant one. Writer and performer Michael Milligan plays Joe, a simple conservative man who wants little more than to run his auto body shop, listen to Rush Limbaugh, and go home to his wife every night. However, when his wife is diagnosed with breast cancer their world falls apart. Within the first few minutes of the play we learn that Joe has been arrested and is explaining the sad path that took him to his present state to an unseen police officer. Even though Joe and his wife have insurance they can’t keep up with the payments that her treatments require. Joe and his wife try to sell their home for money and move into a smaller home but fall victim to a cheating mortgage lender. As their health care costs become insurmountable, Joe and his wife divorce in order for her to finally qualify for Medicaid, and there is certainly no happy ending to this story.

Milligan, an activist who is passionate about healthcare reform and the creation of single payer health insurance, has been performing his one-man show around the country to push forth his political agenda. In addition, he has been visiting the offices of local and national law makers to push health care reform. Milligan will in fact be performing for Minnesota legislators at the state capitol in St. Paul later this summer.

During the performance I attended Milligan even invited one of his fellow protestors onstage to share a song she had created to spread awareness about the issue. Milligan is a talented performer, able to create emotionally evocative material and hold an audience’s attention. By the end of his show, many of the audience members were in tears, clearly moved by Joe’s story which, although fictitious, is one that has surely happened to actual Americans doomed by a flawed system.

(Mercy Killer played atthe IRT Theater, 154 Christopher St. buzzer 3B, New York, NY 10014. Presented by the terraNOVA collective as part of the 10th Annual soloNOVA Arts Festival, May 22 through June 11, 2013. Tickets are $20. Purchase tickets at the door or online at terranovacollective.org.)