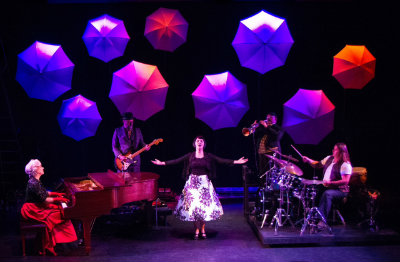 Pittsburgh-based Squonk Opera has played on stages of all sizes across the globe including a short life on Broadway in 2000 (BigSmorgasbordWunderWerk), and as a finalist on NBC’s America’s Got Talent. Headed by Jackie Dempsey and Steve O’Hearn, Squonk specializes in creating pieces of theatre that are nonsensical, incorporating bizarre imagery and original pieces of music involving strange instruments and absurd lyrics.

With their newest work, Mayhem and Majesty, they return to Off Broadway for the first time since 2000 at 59E59 Theaters in a sleek black box. The noting of the venue is important because it serves as a detractor from this show being as fun as it would like to be. Squonk bills Mayhem as a “lush phantasmagoria that defies categorization.” However, on the shiny black conventional stage it actually CAN be categorized as a rock concert by talented musicians with some interesting visuals. This could be as much of a result that the times have caught up with Squonk and their type of performance art. It is not so otherworldly for those who have attended an Arcade Fire concert. Adding a fairly standard rock concert lighting design by Bob Steineck only further places the show in that context.

The evening begins with an announcement that audience is advised “not to look for a story.” This announcement plays a bit like a defense mechanism by the company because what they do is surely considered bizarre in many towns they tour in across America. But this is New York and our tolerance for the bizarre is not to be reckoned with, as evidenced by theatre that can be seen any given night at the likes of The Kitchen, St. Ann’s Warehouse, or Galapagos Art Space.

It appears that Mayhem is indeed a tad scaled back from previous shows. That may be because it is compact enough to tour and give audiences at the far reaches of our country a taste of theatre that’s not plot-driven. This admirable ambition can be a wondrous gateway to stagecraft which does not consist of a spoon-fed plot. The visual gesture of having a wall of white umbrellas open and close on their own does succeed momentarily in creating a hallucinatory experience that could be shared by audiences of all ages. In fact this show is particularly appropriate for young audiences, if not MORE appropriate (aside for some moments of over-amplification in a small space when ear plugs might be advised).

The musicianship of Dempsey, O’Hearn, and the ensemble is more remarkable than the “tricks” employed, like having a camcorder film a guitarist on stage while being simultaneously projected on a screen in a trippy way. Integration of technology like this is not uninteresting exactly, but it plays as though it were one or two operating systems behind what the rest of the theatre community is doing. The more organic props, costumes, and set pieces are more successful than the technology, but are unfortunately not employed nearly as much. The simple introduction of an alien instrument like a multi-horn trumpet is instantly more pleasurable than several other attempts at wowing the audience. However there’s nothing outdated about Kevin Kornicki’s virtuoso drum solos or Anna Elder’s cutting voice.

Even in avoiding story, the scenarios (no matter how bizarre) still demand a commitment from the performers that is absent here at times. If there were one overarching story it would be Elder’s “character” manipulating the other performers through various mechanisms. Even though the story is illogical, the danger and passion should still exist – if not more so. This would help us buy into the transportive nature of music and visual art. At the performance I attended there was a winking at the audience by the performers that seemed to be saying, “aren’t we just so weird?” that undercut the effect.

If you’re already a fan of Squonk you probably won’t want to miss this latest showing because they aren’t in New York all too often. Also, it’s a darn good hour and a half of live music. If you’re not familiar with their work this can only be considered a light version of what they’re capable of creating. After all, their first outing over 20 years ago was a show in a junkyard which incorporated choreographed cranes, earthmovers and machine shears. Now THAT would really be something. Perhaps for their next visit Squonk can move out of their four walls and into any array of abandoned New York warehouses, rail yards or viaducts.