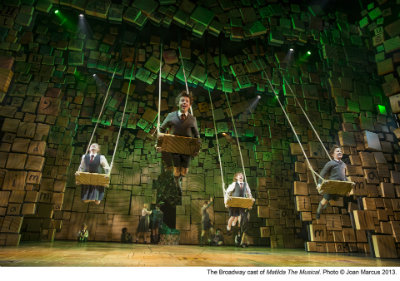 BOTTOM LINE: Why haven't you bought tickets yet?

I don’t think there are many of us who haven’t been touched by the magic of Roald Dahl. Whether you came to his stories through books or film, theses fantastic tales were grounded in valuable life lessons -- be the best you can be, be brave, and, most of all, when things aren’t right, it’s up to us to make them right. Personally, I spent a large portion of my childhood believing that people always get what’s coming to them, and if it’s necessary to use magic to make sure this happens, well that’s all the better. And it’s more fun.

Roald Dahl’s Matilda the Musical, now playing on Broadway, tells a story that many of us know. With his magic-infused Dickensian style, Dahl’s story centers on a young girl in a bad situation. A small genius with a love for imagination and stories, Matilda is treated poorly by her parents, a couple of money-hungry, self-obsessed nasties. But Matilda finds sanctuary at the local library and with her teacher, Miss Honey (Lauren Ward), who recognizes the gifted girl's intellect and passion. Unfortunately, Miss Trunchbull (Bertie Carvel), the sadistic headmistress of her hellish school, treats the students like inmates. Faced with all of these bullying adults, Matilda soon realizes that when something isn’t right, you can't count on anyone but yourself to set it right.

This adaptation, presented by the Royal Shakespeare Company and the Dodgers, makes its Broadway debut after delighting audiences with a West End run that earned a record-setting seven Oliver awards. Featuring a book by Dennis Kelly and music and lyrics by Tim Minchin, Matilda is one of those great adaptations that honors the original text while rounding out the world with a musical sensibility that feels organic to the story.

Under the direction of Matthew Warchus, the entire Shubert Theatre becomes a playground for the child in all of us. The first thing you’ll notice as you enter is just a hint of the fantasy and magic that is Rob Howell’s scenic design. In a musical about magic, this set delivers the tricks, but unlike other shows that rely to heavily on what I call “tricks and pretties,” this set allows the magic to come from Matilda and the children; it’s almost as if Matilda designed this playground herself. And for those of you familiar with the story, you can rest assured that the magic in the story comes vividly alive on stage.

The four young actresses who alternate the title role are Sophia Gennusa, Oona Laurence, Bailey Ryon and Milly Shapiro; on the night of my performance, Shapiro had the honor. And she of course has it all: she's adorable, talented, charismatic. But in general, the children in this production are mind-blowing. They each form their character fully, and it takes you by surprise when you see these gifted actors shift suddenly into mind-blowing dancers, singers, and acrobats. Effortlessly tackling Peter Darling’s indefatigable choreography, the kids fittingly steal the show.

But Kelly and Minchin are smart to keep the adults prominent. Carvel, who won the Olivier when he originated the role in London, brings life to the evil Miss Trunchbull. Carvel doesn’t allow the “man-in-drag” convention to be the full source of humor for the character. Carvel is a smart performer, and his Trunchbull is surprisingly full of subtext and a relentless struggle to keep composure. You can see the character’s twisted thought process play out on Carvel’s face as Trunchbull crafts her evil schemes. This, paired with very dainty physicality choices, blends into a truly unique performance.

Another highlight of the performance is Lesli Margherita’s Mrs. Wormwood, Matilda’s mother with no maternal instincts. Margherita’s delivery is delightfully over-the-top, and she is able to ring a laugh out of nearly every line, especially in scenes with her dancing partner Rudolpho, played with ridiculous flair by Phillip Spaeth.

Minchin’s score is a real highlight as he plays effectively with genre throughout. Larger company numbers such as “School Song” or “Revolting Children” have a militant, almost Pink Floyd spirit. Matilda’s character-revealing song is spritely and mischievous, a perfect song for a young performer. But it is “When I Grow Up” that elevates Matilda to a complex narrative, reflecting all of our lost childhoods and dreams and the ideals of ourselves that we can never quite live up to but always strive for.

I hope and anticipate a long run for Matilda. Family-friendly but not pandering, this production is a delight for theatre-goers of all ages. Matilda transcends adaptation and familiarity and lives as something utterly original and magical.

(Roald Dahl's Matilda the Musical plays at Sam S. Schubert Theater, 225 West 44th Street between 7th and 8th Avenues. Tickets are $37-$147 and can be purchased at telecharge.com or by calling 212.239.6200. For more show info visit matildathemusical.com.)