Mary-Kate Olsen Is in Love 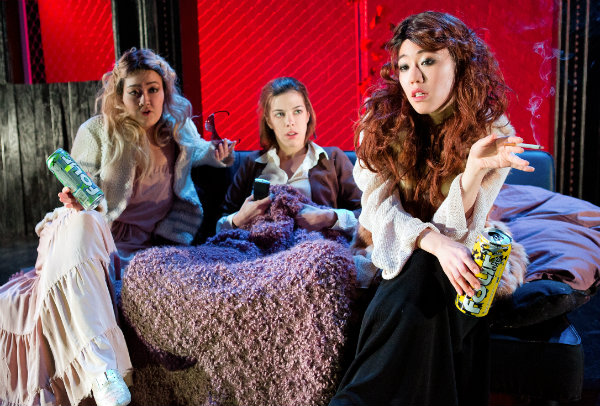 Kana Hatakeyama (as Ashley), Katherine Folk-Sullivan (as Grace) and Christine Lee (as Mary-Kate)

Grace (Katherine Folk-Sullivan) did everything she was supposed to do. She studied hard, went to a top school, married her high school sweetheart, and started a high-earning career. But now she is twenty-seven, her husband Tyler (Alex Grubbs) pays video games all day, and she passes out every night on the couch watching television. It all changes when Mary-Kate and Ashley Olsen (Christine Lee and Kana Hatakeyama) appear to her and demand she take accountability for her life. As she becomes swayed by their persistence, the soldier from Tyler’s video game (Alex Mandell) come to Tyler’s aid, attempting to shake him out of an apathy coma. But after spending so long avoiding the tough issues, will any of these people be able to confront the obstacles of a fulfilled life? Interspersed throughout, a clan of high school aged Amazing Girls reveal their goals, fears, and plans to become great women of substance...somehow.

Mary-Kate Olsen is in Love examines the challenges and pitfalls of the millennial generation with a refreshing sensitivity and insight. The script is resonant and current, with beautiful language juxtaposed to absurd moments of hilarity. The playful structure and storytelling divulge a successful experimentation by talented playwright Mallery Avidon (queerSpawn). I can’t emphasize enough how much I love this play or how highly I recommend people see it. If you love new works, this is the one to see off off Broadway.

The energetic cast combines total commitment with nuance and honesty — the kind of exemplary performances I have come to expect from the Bats, the resident acting company at the Flea. Katherine Folk-Sullivan anchors the piece, her strength and directness lending gravity to a stage populated by silly characters. Though Folk-Sullivan plays a woman who is lost, she does so without losing the grounded center of a high-achieving A-Girl. Kana Hatakeyama’s Ashley Olsen is humorous and morose but also genuine, while Christine Lee plays the titular character with carefully measured frivolousness and certainty. The two are a stunning duo, playing off one another and managing to satire the famous Boho-chic twins without becoming one-note. Alex Grubbs finds a sympathetic slant as the pathetic, checked-out husband, and Alex Madell is a force of energy and earnestness as the soldier.

Kristan Seemel’s direction is creative and thoughtful. He creates beautiful moments within the narrative, and manages both the realistic and the Ruhl-esque on one small stage. This duality is created with a versatile set by Scott Tedmon-Jones and dynamic lighting by John Eckert. Asta Bennie Hostetter’s costumes are less conspicuous but equally clever.

Go see Mary-Kate Olsen Is in Love. It’s a wonderful script that’s brought to life with care and canny by the cast and creative team. This is easily the best thing I have seen off off Broadway this season and in the top handful for the year. If you love theatre, and you love seeing it brought to life with diligence, craft, and passion for the work, you will want to see this world premiere at The Flea.

(Mary-Kate Olsen Is in Love plays at the Flea Theater, 41 White Street between Church and Broadway, through December 8, 2013. Performances are Wednesdays through Sundays at 7PM. Tickets are $15-$35 and can be purchased by calling 212-352-3101 or at www.theflea.org.)