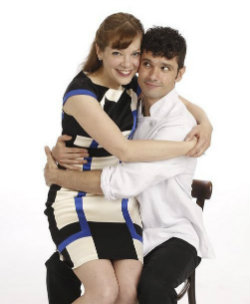 BOTTOM LINE: This musical may not be especially unique, but its engaging performers help to make it entertaining.

This light-hearted musical romantic comedy is as frothy and sweet as the desserts thought up by Little Harry (Rob Sapp), the chef at the heart of Marry Harry. Stuck working at his father’s failing restaurant, Harry is eager to find his own path away from his family. Harry dreams of being a culinary success at a trendy New York City restaurant and looks down upon his father’s unsuccessful gimmicks which include having a different ethnic cuisine served every day. His father’s failed attempts at attracting clientele are interspersed with the comedic meddling of an eccentric performance artist called Ping (Kate Rigg), who adds some spice to the story.

Little Harry decides to set out on making his dream come true by trying to score a job at a restaurant owned by celebrity chef Lidia Bastianich, and he sings a song idolizing her. While Harry is consumed with pursuing his ambitions, he is suddenly swept away by Sherri (Jillian Louis), the daughter of his landlord. The connection between Sherri and Little Harry is so intense and magical that the two decide to marry after their first date. Their desire to marry in such a hurry seems to be propelled in part by the couple’s anxiety over turning 30 and having accomplished what they see as very little in their lives. Despite the play’s somewhat unrealistic storyline, Harry and Sherri’s struggle to create a life for themselves seems to ring quite true and be reflective of this current economic climate.

The musical’s score has pretty standard musical melodies that do not seem different from many of the other works in the New York Musical Theatre Festival, but the two leads manage to pull off the songs well thanks to their spirited and enigmatic performances. Rob Sapp and Jillian Louis work well together as performers and balance each other during the play, helping to pull the audience into the story. Annie Golden is also particularly enthralling as the girlfriend of Harry’s father.