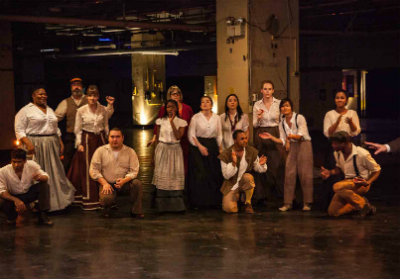 The company of MANNA-HATA. Photo by Dan Lane Williams.

BOTTOM LINE: A broad topic covered broadly at the expense of dramatic sensibility and audience comfort.

While speaking of a childhood game she once played, Shirley Chisholm told me that to be the prisoner was an honor. I remembered that a few hours later when I was desperately searching for a way out.

Something strange is happening in theatre. Perhaps it’s a rebellion against the big money-makers who draw from easily-recognizable pop culture references for big musicals that sell lots and lots of tickets. Maybe it’s just overly-eager artists who ache to share their point of view so badly that they’ll recklessly set it loose on the general public, even if the work isn’t ready. And I in no way mean to suggest that this odd trend is anything new; what with the inundation of theatre artists it’s bound to happen, but it so blatantly flies in the face of what we believe to be the most basic foundation of theatre -- the give and take between performers and spectators -- that it is, nevertheless, a constant amazement to me. The point is, for whatever the reason, some theatre artists have quit considering their audiences.

I’m not trying to pick on Peculiar Works Project’s MANNA-HATA; this just happens to be the most recent, and extreme, example I’ve encountered. MANNA-HATA is described as a multi-disciplinary retelling of Manhattan’s history. Set throughout the James A. Farley Post Office, the company leads the audience into a stylized series of events that helped shape the city. Traveling in groups led by some of the city’s most interesting characters (Shirley Chisholm, played by a delightful Cherrye J. Davis, led my group), the audience weaves throughout the found space of the enormous building, picking up tidbits of the people and philosophies that created New York.

On paper, it all adds up, and playwright Barry Rowell has an obvious passion for the subject matter. Unfortunately, MANNA-HATA suffers from that all-too-common disconnect I mentioned. Now, as this could lead down a very unproductive “what is art?” conversation, let’s just agree that there’s an unspoken contract between theatre artists and the audience, and as easy as it can be to take a shot at the fickle nature of the theatre audience, let’s go ahead and fess up to the unforgivable and easily-fixable shortcomings on the artistic side.

So what are the parameters of this contract? Well, first we must entertain. We ask the audience to leave home, spend money, and experience something, so we have to deliver a product of a high enough caliber to justify this. MANNA-HATA, with all its perceived good intentions, is messy. With no consideration of pace or energy, Rowell, along with Kathleen Amshoff, directs a show that struggles to move from beat to beat. Interspersed with various dance scenes, theatricality trumps dramatic sensibility, and just as we get close to something or somebody to invest in, we’re snapped out of the moment so that we can watch an extended scene of chanting and percussive dancing or perhaps a song that, while sung beautifully, only removes the nice energy that was beginning to drive the show.

In scenes that more closely resemble a relatable dialogue between characters, we are engulfed in caricatures, stereotypes and trite conversation. There are no surprises in MANNA-HATTA; there are no unexpected insights. In a play about a city as vibrant and romantic as New York, we get a very generic and yet somehow indulgent view of discrimination, politics, greed, art, and society. And even those surface-level observations are not simply touched upon but instead wallowed in for uncomfortably lengthy amounts of time. Nothing new is being said in this play, but it is being said with all the importance it can muster.

We also owe it to our audience to get to the point. Advertised as a two-and-a-half hour production, I had mentally prepared for the long evening. However, at the actual three-and-a-half hour run time I experienced, I found myself going through a range of emotions from fatigue to annoyance to claustrophobia to finally outrage. Keeping in mind that the majority of the play is spent on foot, it became painful watching the elderly patrons, who were a large portion of the audience, struggle around the building and rejoice when a room we entered offered a single chair, only to despair when it was quickly occupied. The length of the show, especially in this format, is nothing short of offensive.

You have to know your audience. I spent a lot of time (I had plenty) thinking about who would be the target audience for this play. Mingling with my fellow exhausted audience members, I understood why many of them were there -- they expressed a genuine love for the city and its history, but they were not prepared for the evening that awaited them. Something felt familiar though, and toward the end I realized that I felt like a high school student on a field trip, being led through some educational, interactive experience that I only signed up for so that I could skip P.E. and go to Pizza Hut. As an adult, I was genuinely excited about the experience, but the disjointed script and interpretative movement left me with little new and definitely no exciting insight into this cultural mecca. I’d say it left me cold if the venue itself wasn’t so hot.

But not all of the sins were committed against the audience. As the weary travelers were ushered into the final room after a very generic and unmoving retelling of the Stonewall riots (partially set to percussive dance), I watched the also-weary actors who had committed fully to this epic adventure. Assuming and hoping the evening was almost over, we still had to watch videos of the towers falling, hear another song, and pass around paper ships to further reinforce the subtle-as-a-dumptruck theme of personal journey. As I actively avoided the ships, I observed smart, perceptive actors who knew the toll the evening was taking on the audience but were unwavering in their portrayal of the hundreds of people they embodied throughout the night. I almost felt worse for them than I did for the audience, and my hope for this company of performers is that they get a chance to showcase their talents very soon.

I hate that MANNA-HATA has to bear the brunt of this criticism; it’s not alone. But getting people to come to the theatre in the first place is becoming more and more an insurmountable obstacle. If MANNA-HATA had been my first experience with theatre, it would’ve probably been my last, and that shouldn’t be acceptable. It begs the question:  Who are we doing this for? Are we just creating theatre for ourselves? Are we ignoring the very people who sustain our art form? We must learn to put our egos aside and realize that we don’t create art within a vacuum. As it’s often said, theatre is a collaborative art, but that collaboration extends beyond the stage. Do we have to cater to our audiences?  Of course not, but we owe them a laugh, a cry, a revelation, a call to arms, a nostalgic journey, or something, anything that gets them to come back. As artists, we often accept one another and invite each other into our community; isn’t it time we allow the audience in as well?

(MANNA-HATA plays at the James A. Farley Post Office, 425 Eighth Avenue, through June 23rd. Performances are Thursdays - Sundays at 7pm. Tickets are $18 and are available at peculiarworks.com or by calling 866.811.4111.)