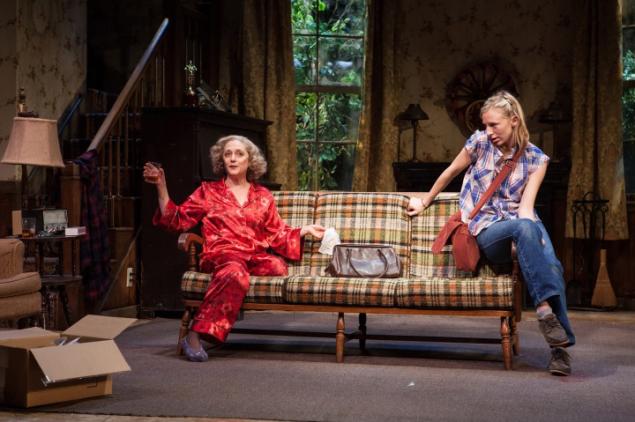 Carol Kane and Mickey Sumner in THE LYING LESSON.

BOTTOM LINE: A tidy play about Bette Davis and an unpredictable new acquaintance.

The Lying Lesson is a play about Bette Davis's later years, as her illustrious film career has ended and she makes plans to purchase a house in Maine. Full disclosure: I know very little about Bette Davis. I know that's blasphemy and I'm embarrassed to admit it, but I have somehow avoided Ms. Davis and her canon. I'm sure I missed a LOT of the references in The Lying Lesson. I don't think background knowledge is key to one's enjoyment of this play, but I think it is very likely it enhances the experience.

Carol Kane plays Davis, aka Ruth Elizabeth, as she reestablishes herself in her new environment. She has come to the house in Maine for the closing, and she finds herself alone as the sellers are unavailable to meet with her. They encourage her to stay in the house and get comfortable in her new home. She soon meets Minnie (Mickey Sumner), housekeeper to the old tenants and quintessential "townie." Minnie is eager to please, and though she is unfamiliar with Davis's career, she vies for the perceived employment opportunity.

The opening scene -- set in the house at night during an ominous thunderstorm as Ruth arrives and gets her bearings -- offers an inviting entry point into the story. What is she doing there? Why is this lanky lady crawling in through the window? Is that butcher knife going to be put to use? Though the play is not as mysterious as this scene would lead us to believe, it does hinge on intrigue...both Ruth and Minnie spend the rest of the play trying to figure each other out.

Lucas has crafted a very tidy play (every moment seems deliberate), and in the always capable hands of director Pam MacKinnon everything is right where it should be. The performances are engaging: the venerable Ms. Kane is the perfect Davis (I steal that bit of info from what others have told me) and Ms. Sumner plays Minnie as a balancing act, you sometimes trust her completely and at other times see red flags.

The Lying Lesson is brought to life by a group of highly skilled theatremakers and it's often a treat to watch, even if it's not the most compelling subject matter (the stakes are unevenly matched between the women and Minnie's story seems a bit forced). I suspect that fans of Bette Davis will find even more to enjoy. If you need me I'll be updating my Netflix queue.