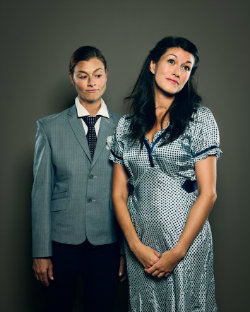 Katie Honaker and Sarah Brill in THE LEARNED LADIES. Photo by Chris Montgomery.

BOTTOM LINE: A classical comedy with a twist, it looks delicious and sounds even better.

The plays of Molière are famous. They are old. And they are funny. It’s because they’re funny that, despite being old, they are still famous. So the bottom line with any production of Molière, no matter how inventive or daring, is whether it makes you laugh. The current revival of The Learned Ladies, directed by Paul Urcioli and featuring a fantastic cast, does its job brilliantly.

Frenchman Molière’s favorite subject is the bourgeois family, who, unable to buy themselves into nobility, instead become obsessed with education and self-improvement. In The Learned Ladies, the normal functioning of a prosperous, happy home is disrupted by the intellectual pursuits of mother, daughter, and sister-in-law, who have invited a so-called poet to move into the house and tutor them in matters artistic and philosophical. The plot veers dangerously close to annoying sexist stereotypes (not all that surprising in a play over three hundred years old), but this production dulls a little of that sting through casting: here, all the men are women too. Unlike the works of Shakespeare, written for his all-male company, Molière’s plays were originally performed by mixed-gender casts; however, adopting a single-sex model here is more than just a clever stunt.

Working from a translation by Freyda Thomas that updates the play’s language and cultural references (Molière, of course, would have known nothing of Einstein or Nietzsche) while preserving its rhymed couplets, Urcioli sets his Ladies in the 1930s. His design team makes the most of it, with Daniel Krause’s set incorporating an elegant period phonograph and costumer Katja Andreiev arraying the cast in everything from tennis dresses to kimonos to red suede slippers. These details are the cherry on top of a very amusing sundae. Whether playing a skirt or a trouser role, each member of the combined Cake and Ateh companies acquits herself admirably. From Elizabeth Neptune, channeling Jackie Gleason as the put-upon paterfamilias, down to Janna Emig as the inevitable wisecracking maid, they work together like a well-oiled comedy machine.

With material this good, you’d think a director could scarcely go wrong, but sadly, we’ve all seen more than our share of disappointing classical theatre. Urcioli and his team have avoided the all-too-common pitfalls and produced a Learned Ladies that reminds us why people still bother performing Molière: the plays are funny. No Ph.Ds required; it’s a no-brainer.

(The Learned Ladies plays at the June Havoc Theatre in the Abingdon Theatre Arts Complex, 312 West 36th Street between 8th and 9th Avenues, through October 19th, 2013. Performances are Wednesday through Friday at 8PM, Saturday at 2PM and 8PM, and Sunday at 3PM. Tickets are $18 and are available at brownpapertickets.com/.)