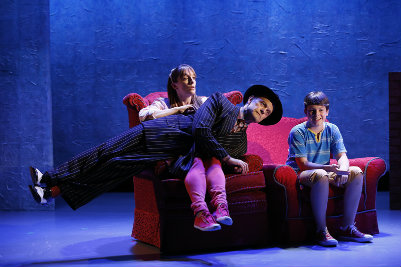 There’s a sort of somber fancy that pervades the three stories that make up The Landing, and perhaps this tone is the connecting theme of the evening. This is certainly true in John Kander’s score, which haunts equally in each of the drastically different pieces. With book and lyrics by Greg Pierce, The Landing is first and foremost an entertaining piece of musical theatre, one that avoids an attempt at a “big picture” statement, allowing instead a journey of character exploration and storytelling.

And perhaps this is a double-edged sword. As we audience members tend to do, we start searching for that overarching statement as soon as the evening begins. The program denotes three parts to the evening, but we’re unsure of their connection. Also, the four-actor ensemble -- Julia Murney, David Hyde Pierce, Frankie Seratch, and Paul Anthony Stewart -- do not have character names listed, suggesting multiple roles throughout.

As the production comes to a close, my only wish is that I hadn’t spent so much time trying to connect the three. The key to The Landing is allowing the stories to be told and to take them each for what they are. Sure, there are universal truths that connect one piece to the next, just as you could in any two pieces of art, but each course of this theatrical dinner is a different flavor profile, with only Kander’s score reminding you that you’re still in the same restaurant.

In “Andra,” the first piece of the evening, young Noah (Seratch) is a boy drawn to numbers, to constants, much like his fastidious mother (Murney). In the most reality-based piece, Noah befriends Ben (Stewart), a carpenter who has been hired to redo his family's kitchen. As Ben teaches Noah about the constellations, Noah begins to come out of his shell, only to be violently shoved back in when his telescope moves from his heavenly protectors to the harsh realities of earth. Delicate and thoughtful, aided by Pierce’s narration, the play is a gentle start to the evening, even if it plays a bit too heavily on cliché and leaves the characters more hopeless than when they began.

The tone shifts drastically in the second piece, “The Brick.” In this over-the-top comedy, Darius (Seratch) has come to spend the summer with his aunt and uncle (Murney and Stewart) in Connecticut. He and his aunt Charl spend their nights watching old gangster movies, and she begins to express a longing for the lives of those hard-boiled characters, polar opposite of her mundane life of bundt cakes. But a late-night infomercial promises something special: an actual brick from the wall of the St. Valentines’ Day Massacre. Then it arrives -- a brick (Pierce) in a very large box who begins to speak to Charl. Drawn into her world, Charl soon finds herself compelled to live the gangster lifestyle, murder and all, while Darius tries to stop the brick and save her. Ridiculous and delightful, “The Brick” is a comedic break, if it doesn’t quite know how and when to end.

The program wraps up with the eponymous “The Landing,” which is the shining jewel of the evening. Denny and Jake (Stewart and Pierce) have always wanted a son. When they finally adopt Colin (Seratch), everything is perfect -- a little too perfect. As Jake begins to see his world unravel from the incessant perfection, he discovers something more sinister and earth-shattering. “The Landing” is poignant; it stings with honesty and compassion. Whatever sins may be committed by the first two pieces are completely forgiven by this small masterpiece.

At an intermission-less 100 minutes, there are clear places the evening can be cut down. Kander’s score (conducted by Paul Masse) and Greg Pierce’s book don’t always do each other many favors as they both tend to wallow at times, and there’s a sense that this production could benefit from one more workshop and rewrite. But director Walter Bobbie keeps things moving as nicely as possible.
The ensemble, however, gets to play with many versatile characters, and they do so beautifully. Murney and Pierce are an intoxicating couple in “The Brick,” and, in the same piece, Stewart’s character roles steal the scene. In “The Landing,” Pierce goes right for the heart, and he doesn’t miss; his final moments of the evening are some of the hardest to watch that I’ve experienced. Seratch shines throughout, but his turn in “The Landing” is beyond his years, thoughtful and complex.

The most promising aspect of The Landing is producibility. It’s the type of show you could expect to see having a nice run in regional theaters all over. The fact that it’s also thoughtful and whimsical makes me hope that this will be the case.

(The Landing plays at Vineyard Theatre, 108 East 15th Street, through November 24, 2013. Performances are Tuesdays and Wednesdays at 7PM; Thursdays at 8PM; Fridays at 8PM; and Saturdays and Sundays at 3PM. Tickets are $80-$100 and are available at www.vineyardtheatre.org.)