Off Off Broadway, Play
Runs through 7.20.13
The Dororthy Streslin Theater, 312 West 36th Street 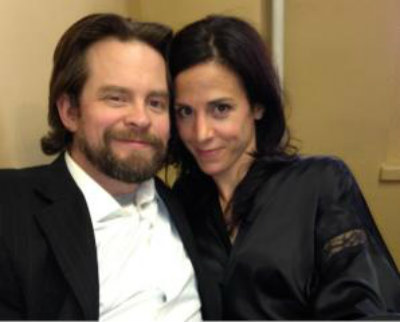 BOTTOM LINE: This short one act is amusing to watch, thanks in part to the energy of the performers.

Perhaps some more appropriate, less clichéd titles for the play Love Stinks (which opens up with the classic song of the same title) could be Love for the Emotionally Repressed, or Love is a Power Trip. This is because the play does not show so much that love sucks, but rather, that when a couple attempts to hide their love for one another to avoid vulnerability, the exposure of those emotions leads to a power struggle. This is the focus of much of this play.

Colleen (Rosie Cosch) and Jack (Matthew Hammond) are two lawyers who have snuck away for an afternoon rendezvous. Although the two are clearly fond of each other, their relationship seems to be undefined and both parties have avoided any discussion of just what might be between them and just where it might be going. As the two lay entwined in Colleen’s bed they begin to argue over a case Colleen is working on in which a man became so enraged by hearing his girlfriend utter the words "New Jersey" that he shot her in the face. The two launch into a heated argument over whether or not it is possible for a sane person to be driven to such insane actions. As their argument goes on, we soon learn that Colleen is a woman who prides herself on having eliminated all physical vulnerability from her life. She never cries and never lets her pursuit of sexual satisfaction become clouded by emotions. When Colleen persuades Jack into another round of sex despite a pressing meeting, Jack makes the mistake of referring to their act of sex as “love making.” Colleen is livid, arguing that she has bit her lip any time any words implying love were about to cross her lips, and now that he has opened up the floodgates of buried emotions, their relationship will never be the same. Colleen dramatically describes the emotional agony that will now await her, claiming that she will now forever worry if Jack is going off to see another woman. This agony, she claims will lead her to gorge herself on chocolate, causing her to grow fat, all because of the emotions that have now been exposed. As the scene goes on things become more and more over the top.

Much of the play’s humor is derived from actor Rosie Cosch’s knack for delivering deadpan jokes. Her ability for physical comedy, along with the direction by Joan Kane, enables her to milk every laugh possible from every joke. Matthew Hammond also matches Cosch’s high energy level, making their constant verbal repartee engaging. Although the plot to Love Stinks is predictable, it is an entertaining show thanks to the likability of both performers who are able to effectively pull off the script’s most climactic moments.