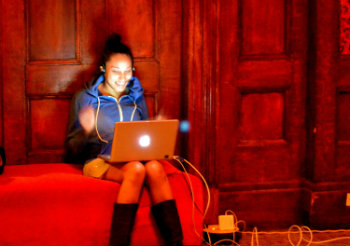 One of the affairs in LONG DISTANCE AFFAIR. Photo by LDA.

BOTTOM LINE: Redefining how rewarding a technology-driven performance can be, this unique Skype-centric production is simply swell.

A Skype chirp can be the loveliest sound. When separated from friends and loved ones, Skype has become the go-to mechanism for communication across land and sea. Long before Apple thought up Facetime, Skype was there to allow face-to-face contact to the isolated millions. And that happy chirp, or swoosh, or any of Skype’s funky and now old school noises, never fail to illicit a such sweet nostalgia for any who have used her choppy bandwith to stave off loneliness. Capitalizing on the insta-emotional connection Skype so readily makes available, Long Distance Affair offers an evening of brief encounters with actors across the planet; a few ten-minute marriages between the lobby of the Gershwin Hotel in New York and one of eleven locations worldwide. The experience is available through February 28th.

In a sumptuous red room, audience members are moved individually among computer stations, each given headphones and little instruction, then let loose into someone else’s world. Though the content varies greatly between each interaction, every new face that appears on Skype holds within it the same level of genuine excitement for connection and contact that Skype has come to promise. Naturally, this is not theatre for the timid -- the artists on the other end of the computer expect a certain level of willingness to play, or at least interact, so come armed with expectations asunder and eagerness aplenty.

One woman blames you for her belief in Buddhist thinking and interest in yoga. One woman accuses you of being callus and uncaring, a third, of needing to think more quickly, lest the world end. Each affair, naturally, is personal in its own way, with varying degrees of comfort and aggression, sadness and silliness. Just as they all offer a genuine connection, each encounter invites authentic emotional exchange on a very personal level. Undoubtedly more so than more traditional theatrical productions, Long Distance Affair offers only intense singular experiences thanks to the successful implementation of direct person-to-person contact.

This is where PopUp Theatrics should be lauded for this feat. Beyond finding eleven actors willing to appear during the wee hours of their nights on some computer screen to an unsuspecting New Yorker, PopUp Theatrics has crafted a production that is reduced down to the core element so very much theatre fails to deliver: simple, unadulterated interaction between audience and actor. Long Distance Affair also serves as a refreshing reminder that technology can be used for good (good as in helping people to find direct and meaningful contact, not preventing them from it) -- an experiment long overdue, to say the least.

And though the format of the show offers each actor a good dose more believability than Joe Schmoe on stage, lending to a bit more heartbreak upon remembering that this is all a performance, after all, that little bit of love lost is worth it. Long Distance Affair provides an evening of oft-extraordinary intimacy with a handful of strangers that serves as a pleasant reminder that human connection via technology is possible, and even alive and well at The Gershwin Hotel.