Written and Directed by Jonathan Ashley
Produced by The Shelter 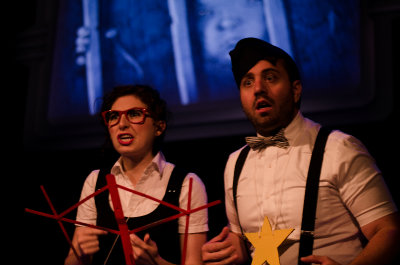 BOTTOM LINE: A beautiful adventure through space not quite up to hyperspeed.

Remember the good old days sitting around the radio as a kid listening to the latest “Buck Rogers” episodic space opera? Well, I don’t -- and if you were born after 1950 you may not either. Never fear young earthlings, The Shelter have brought the experience back to the stage in an original cosmic adventure for all ages with Lily & Kosmo Live. This staged radio play is written and directed by Jonathan Ashley and inspired by radio space operas like “Buck Rogers” and the youthful mischief of “The Little Rascals.” A 2013 audience may also find correlations with Buzz Lightyear, “Star Wars” and “Up.” George Lucas often cites early space operas like “Buck Rogers” as a primary inspiration for his galactic melodrama.

Ashley’s radio play centers around a six-year-old avid fan of Buck Rogers who dreams of venturing into space on her own. The play is bookended with the lone omnipresence of Voxley (Bob Kolsby) playing part Garrison Keillor and part Stage Manager (a la “Our Town”). With an oversized wrench he starts the magic and narration. Lily Lupino (an effervescent performance by Danielle Beckman) is a young space cadet from Brooklyn whose father (a versatile Howard Pinhasik) doesn’t approve of young girls being interested in such things. After having her space toys (or vital space tools rather) taken away by her father to be kept away for her baby brother, she discovers something has crashed down in her living room. It is here she meets Kosmo Kidd (Jordan Kenneth Kamp), a reincarnate of Buck Rogers and the Peter Pan to Lily’s Wendy.

Kosmo takes Lily to his space headquarters, which resembles a tree-house in Ashley’s whimsical projected illustration. Here she meets Kosmo’s crew of three lost boys in space. They encounter Kosmo’s enemies as the Morgonites take over the stage play led by actor Paco Lozano in the most committed comedic performance of the evening. Ashley breaks the conventions of the radio play here as the red robed minions invade the audience and question Voxley on the happenings of the play. The Morgonites are led by The Meanman of Morgo (also played by Pinhasik) and have a deliciously campy “red scare” villainous aura of the 1950s.

As Kosmo and Lily traipse across the universe, Andy Evan Cohen acts as foley artist enhancing the simple radio play setup of music stands and minimal costumes and props. Ashley’s beautiful illustrations are projected throughout giving the play a storybook aesthetic. The character of Lily is close kin with Dorothy from Kansas -- only Lily is a little scrappier and a little more Brooklyn. However, like that other story of escaping home for fantastical adventures, Ashley’s story has characters reappear in the guise of villains and creatures in such a way that it can be thought of as either a childhood dream or reality--– depending on the willingness of your imagination.

While the comedic and clever multimedia add to the fun of the play, I couldn’t help but feel that at times Ashley was over-committing to references of dramaturgical inspirations for the play and to the logistics of his created world. He enlists an audience member to come and read a section of the science-fiction laced lingo at one point which can come off as either amusing or pretentious depending on the brave individual brought up to the stage.

Also, by abandoning the reality of the radio play it strangely took away some of the fun of staging the show by removing the convention that the entire story could feasibly be heard just as well as seen. Along these lines, Cohen is placed at the back of the stage and some of his excellent foley work is masked taking away another delight of seeing a radio play live -- especially for younger audiences. The play is caught in a place that many “theater for all audiences” pieces land where they don’t quite resonate fully at all times to any age in trying to cater to all.

Ashley’s love for the era and the medium is evident. His care and attention to fleshing out a full world of adventure is a real trip for the audience. He also lovingly incorporates important themes for younger audiences about gender equality, imagination and family. Nevertheless, he could perhaps cut some of the detail in service to allowing this incredibly animated cast to go even further with the camp. Beckmann is a delightful lead to the ensemble and instantly gets the audience on her side. I’d be eager to see what would happen if she and the rest of this occasionally low-energy cast went to the ends of not only space, but also live entertainment.