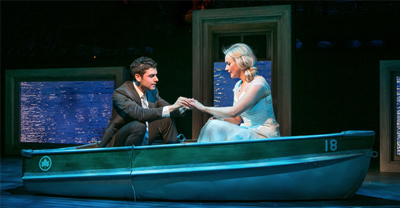 Adam Kantor and Betsy Wolfe in THE LAST FIVE YEARS.

BOTTOM LINE: If you see a show where the original cast recording is one of the defining albums of your young adulthood, it can go either terribly or amazing. This was the latter for me.

YOU GUYZ. Let me be clear on my feelings for the original cast recording: I adore it. I admit it, right out in the open, I am a fangirl for this Musical. It spawned my undying love for Norbert Leo Butz (are you reading this, Norbert? I want to marry your voice. And then we can divorce and write a musical about it. Call Me). I exploded with rainbows and unicorns of excitement when I heard that Second Stage was remounting the show, so my enjoyment of seeing a well-produced stage production is definitely biased. But I will try to be fair and even-handed in my reviewing (there are issues) despite my overwhelming need to do nothing but SQUEE because I got to see Betsy Wolfe tear the theatre down in "Summer in Ohio."

Must. Report. With Fairness. To the summary!

The Last Five Years covers the five chronological years of a particularly intense relationship, marriage, and divorce between Jamie Wellerstien (Adam Kantor, a young wildly successful novelist/writer, and Catherine Hiatt (Betsy Wolfe), a young struggling Musical Theatre Actor who tends bar and temps and does summer stock in Ohio to support her attempts to make it in the NYC. The twist is that Cathy tells their story from the end of the relationship to the beginning, and Jamie tells the story from meeting Cathy to the moment of divorce, so we get the arcs of the relationship from opposite ends and in reflection of each other.

There's nothing remarkably original in the story; two artists meet, fall wildly passionately in love, get married, and as the success of Jamie's career and philandering pulls him further and further away from her, she is left alone in her unhappiness and ambition with no results. I don't know that the chronological mirroring of the 5-year timeline adds that much in a narrative sense, but it does give a hint of complexity to an otherwise straightforward modern tale of adult relationships.

The design of the show makes me feel pure, unadulterated joy. Video (Jeff Sugg), Scenic (Derek McLane), and Lighting (Jeff Croiter) work together seamlessly, simply, and cleanly, producing a show design that is to be lauded for both its beauty and support and surprise; here is design that doesn't feel separate or too much or too big, but work that quietly and unassumingly create a space that feels perfect for the story. Bits and pieces of Cathy and Jamie's life track on and offstage, and the world of the song is reflected in the window arrangements that make up the major scenic and video heavy lifting.

Cats, Betsy Wolfe is a star. Endearing and Engaging and Warm and Charming and Real and HILARIOUS with an amazing voice, and she works the hell out of that extremely difficult vocal part. Clear as a bell, perfectly placed, she mixed in all the right places, and when she let the belt go, it was nothing short of glorious. I cannot say enough good things about her vocal performance. As a character, Cathy is not really well developed (I'm talking about what is written, rather than what is played). I got a larger and better sense of who Jamie is through the show, but then again, Jamie sings mostly about himself, and Cathy sings mostly about Jamie. So there's that.

I was less chuffed with Adam Kantor's performance. I want to be clear on this, he does a great job. And it is nigh on impossible to compete with Norbert Leo Butz and what he did vocally with this part 11 years ago when the show premiered. You have to try to make it your own, and I could see him working very hard to re-write the Jamie Wellerstien book. My problem with the performance was that I wanted Adam to make me sympathize or empathize with the character, I wanted to feel for Jamie a little, but I couldn't summon anything other than, 'this guy is a douchetwazzle, what did you see in him?' I can't say for certain whether it was just Adam K's performance or if that's just the character, that Jamie leaves no room for audience empathy, but the playing of him seemed one-dimensional. He was cute and funny and charming and incredibly selfish and I really wanted to like him, but I couldn't. Speaking vocally, I thought he was a bit riff-happy, but again, I am married to Norbert Leo Butz's voice, so this is more my opinion than a genuine criticism of his vocal performance.

And here's a fun thing: Jason Robert Brown (who also wrote the music and lyrics) directed this, and great job, Jason Robert Brown. I know my approbation means the world to you. No seriously, the overall production and moment-to-moment stuff is all active and well-paced. My one slight 'ehhhhh': mildly annoyed by both actors 'pretending' they were singing to their invisible partner. I know they are talking to each other, even if they are not onstage, so did I really need to watch them singing to invisible partners stage left or stage right? Couldn't they just have addressed the 4th wall so I could see them? It annoyed me slightly to see two such gifted actors speaking to pretend people. However, I don't know the whole story, and I'm pre-disposed to forgive because I heart this show with the fire and passion of a thousands suns, so let's imagine they tried it and it didn't work.

All in all, I would pay to see this show again. For all you other fangirls (and boys!) out there, I leave you with my favorite words from the show (and put yours in the comments!):

Here's a headshot guy and a new BackStage
Where you're right for something on every page
Take a breath/Take a step/Take a chance
Take your time.