Choreographed and Directed by Lar Lubovitch 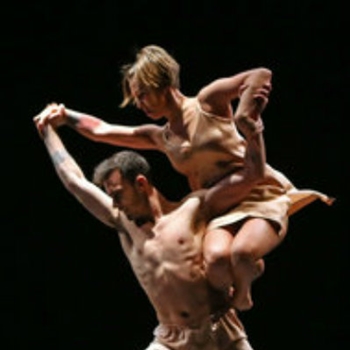 BOTTOM LINE: A varied and relatively recent look back at Lar Lubovitch's 45th season at the Joyce. Program B has 5 works from the last 2 years.

Lar Lubovitch kicked off it's second program of the 45th season with quite a bit of variety and lots of beautiful dancing. Most of the pieces had live music, and I appreciated that the musician's placement onstage wasn't an afterthought. The first piece, "Transparent Things," based on the Picasso painting "Family of Saltimbanques" (itinerant street performers), was beautiful in an expected, predictable way. The six dancers swept across the space as if they were creating calligraphy with their incredible lines and sweeping motions that enveloped into a live moving sculpture. At one point, they lay interwoven through the musicians as the music ended quietly. The costumes were created from the painting reminiscent of the Comedia del Arte period by Reid Bartelme, an ex-dancer in the company and now esteemed costume designer. His quietly stunning work was seen in every piece but the finale, "Crazy 8s."

The second piece, " Crisis Variations," had a more violent, urban street feel with harsh music by Yegeniy Sharlat. More of the same vacillating moving sculptures left behind a duet between Katarzyna Skarpetowska and Brian McGinnis. The dashing and daring pair clearly have chemistry and at moments, he drags her across the stage on her knees as if she is suspended on a moving cloud. She is no damsel in distress, but a powerful Rosie the Riveter type. It is refreshing to see these women dance as savagely as they do gracefully.

The third piece, "Listen," was refreshing and stood apart as a work by a different choreographer, dancer Katarzyna Skarpetowska. It was a duet with skillful and emotionally charged dancing from Nicole Corea and Reed Luplau. It showed invention, but also theme and variation which grounded it. I wanted it to go on and on.

Another piece showcased six men: "As Sleep Befell." I felt as if I was watching a Michelangelo sculpture through a kaleidoscope, graceful but yet ever shifting.

The last piece, "Crazy 8s" was a fun, hoe-down and the perfect bodies of the dancers were seen in sporting very flattering, eccentric cowboy unitards by Fritz Masten. It was a long program, but it showcased just how far Lar Lubovitch's range has come in the last 45 years and that he isn't taking himself too seriously, at least, not all the time.