Off Off Broadway, New Play
Runs through 3.10.13
The Brick Theater, 579 Metropolitan Avenue, Brooklyn 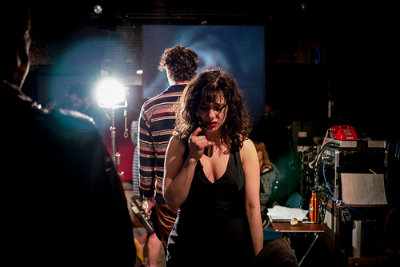 BOTTOM LINE: This unusual play, based on an experimental French New Wave film, proves to be as innovative as its source material.

Regardless of one’s final opinion of Dangerous Grounds’ production of L’Amour Fou at The Brick Theater, it is undeniably innovative and completely unique, eschewing the standards of typical theatrical stagings. This work is part of a trio of plays put on by Dangerous Ground, which aim to adapt three of the most renowned films by French New Wave director Jacques Rivette for the stage. The film L’Amour Fou, made in 1968, is a faux documentary which focuses on a theater crew rehearsing a modern reworking of Rancine’s Andromaque. The tensions of the rehearsal are heightened by the presence of a film crew that invades their daily lives. Rivette chose to have the actors improvise many of their lines and many of their actions giving it a strong documentary feel, a sensibility that transfers completely to this production in which much time is spent seeing actors make small talk, drink tea, strum guitars, smoke numerous cigarettes (the stage becomes veiled in a constant fog of smoke), and play a pinball machine. Very little of the dialogue sounds like a script and rather sounds like the mundane small talk of a small theater company.

The typical set up of The Brick theater has been completely thrown out for this production with audience members seated at two separate corners of the theater and the entire space of the theater becoming the stage, with even a few scenes shot in the doorway and on the front sidewalk. Video projections on the two other walls show what the on-stage film crew is filming as well as what is happening behind the stage in the apartment where the play’s director Sebastien (Mickey Solis) and his wife Claire (Susannah Hoffman) reside. Throughout the course of the play both walls are filled with video footage -- this can be distracting, especially considering that the audience also has the events on the stage in front of them to focus on. A planted audience member helps to direct the audience by turning her head at certain screens when something interesting is about to happen and making audible exclamations urging others to look.

When the film crew begins to invade the lives of the cast, Claire quits the show, leading Sebastien to hire his former girlfriend Marta (Sarah Baskin) to take over the role. Now, with nothing to do, Claire spends her days pouting in the apartment and throwing fits at the rehearsals. As her husband’s sexual attraction to Marta and other women in the cast becomes more evident Claire becomes consumed with jealousy and slips closer and closer to madness. Her growing madness begins to mirror that of her character Hermione with her delivering the line, “What madness seizes me?” in relation to her own life. Soon Marta and Sebastien begin to slip out of reality as the demands of the production become greater. Sebastien demands that the actors not act but rather exist as their characters and Marta seems to fully become Hermione by the play’s end.

The film version of this work clocks in at a whopping four hours and the play is nearly as long at three hours. This length of time feels arduous to sit through by the end, especially without an intermission. (It seems cruel to not be given a bathroom break when the actors themselves are all seen using the nearby lavatory. This led some audience members to boldly walk in front of actors while scenes were in progress to utilize the bathroom.) Perhaps a short break would make this play easier to sit through, as would a bit of condensing and adapting of the source material. Nevertheless, the play leaves a lasting effect that lingers long after the actors have left the stage. The three lead actors -- Sarah Baskin, Mickey Solis, and Susannah Hoffman -- all have enthralling presences on stage and are able to effectively evoke their characters’ mental disintegrations. Director (and designer) Doris Mirescu evokes many of the sensibilities of the film’s late '60s era in the set and in the visually pleasing costumes. Mirescu’s innovative approach to staging this production is surely one that will inspire other groundbreaking works, much the way that filmmaker (and writer) Rivette challenged the medium of film.

(L'Amour Fou plays at The Brick Theater, 579 Metropolitan Avenue through March 10, 2013. Remaining performances are Thursday, Friday, Saturday, and Sunday at 7PM. Tickets are $18 and are available at bricktheater.com or by calling 1-866-811-4111.)