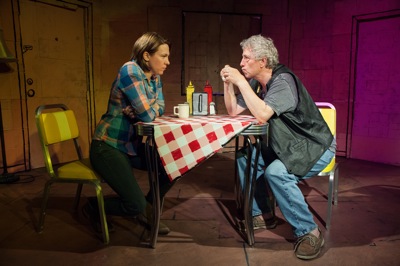 BOTTOM LINE: A look at life in L.A., particularly an actor's life in L.A., from the perspective of a skeptical sister visiting from back East.

La Brea offers one of the best opening monologues, probably ever. Leah (Rebecca Henderson) stands in a spotlight and explains her hobby: kleptomania. In much the same way that Breaking Bad's Walter White makes the meth business sexy, Leah's explanation of the need to steal is honest and thoughtful. And despite the creepiest of undertones, Henderson delivers this monologue with such sincerity that stealing seems like a downright natural artistic expression.

Leah heads to LA to visit her brother Steven (David Wilson Barnes), an actor who is getting tired of waiting for his big break. Steven has had some back luck -- we see him get dumped by his scene partner Claire (Crystal Finn) -- but a new connection involving someone at the Scientology center gives him a bit of hope and the possibility of a big opportunity. He thinks Leah's there to reinvent herself, but she really intends to offer her brother some perspective and to show him why his chosen lifestyle is a waste. In one of La Brea's most pointed moments, Leah explains to Steven how stealing allows her to go after what she wants rather than sitting back patiently waiting for something good to happen.

La Brea attempts to do a lot in 90 minutes. It's part silly comedy (there is a dance routine), and part metaphorical observation about how lives are led (tar pits). It's a physical show; the set literally deconstructs as the play continues and by the final scene all of the walls have come down to reveal only the set's frame. And its an intimate portrait of relationships (Leah's presence causes Steven to reevaluate his choices). Another reoccurring topic is the superficiality that comes with life in L.A., where if you're older than 27 your ship has probably already sailed. The profession of acting is another oft-examined theme, and in one scene when Steven and Leah go to the movies we see the movie acted out on stage in this hybrid film-noir/contemporary theatre meta-mash-up.

Some of these concepts work better than others. La Brea is trying to do and say so much that it sometimes feels bogged down within its world. And there is so much metaphor that there is more to chew on than actually digest. That said, these themes are universally understood by artists on both coasts, and Gregory Moss's script is full of relatable quirky moments. The cast does formidable work with the tone, always genuine despite the camp. And the play itself is very funny. Director Adam Greenfield keeps everything clipping right along as Steven's world comes crashing down.