By Harvey Fierstein; Music and Lyrics by Cyndi Lauper; Directed by Jerry Mitchell 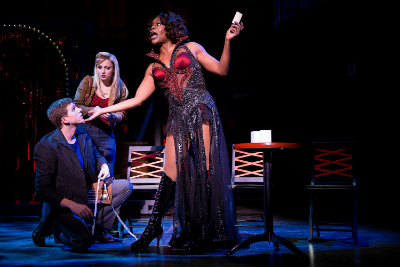 BOTTOM LINE: Kinky Boots is both amusing and appealing thanks in part to Cyndi Lauper's musical score.

Despite its provocative title and subject matter, there’s little that’s envelope-pushing or edgy about this musical, and yet it succeeds in being both fun and joyful. Kinky Boots is based on a 2005 movie of the same name (which was based on a true story that was the subject of a documentary), depicting how a shoe salesman saves his family’s shoe business by catering to the footwear needs of drag queens.

The plot focuses on Charlie (Stark Sands), who escapes the dull life of shoe manufacturing in Northampton by moving to London with his glamorous girlfriend Nicola (Celina Carvajal), only to be pulled back when his father unexpectedly dies. After a chance encounter with a night club performing drag queen named Lola (Billy Porter), and a few wise suggestions from his employee Lauren (Annaleigh Ashford), Charlie begins to attempt to manufacture flamboyant stiletto boots for drag queens. In the process he pulls Lola in as a designer at the shoe factory, forcing the ignorant employees to learn the importance of acceptance. During the course of the show a parallel is drawn between Charlie’s father and Lola’s father, with both of them making peace with fathers who didn’t always accept them.

Despite following the typical fare of Broadway musicals, the musical numbers which comprise Kinky Boots feel far more fresh and engaging than those of other shows, and this is where much of the show’s appeal is derived. This can be credited to Cyndi Lauper who wrote the show’s entire score, imbuing it with her '80s-flavored, synthesizer and keyboard heavy, brand of pop rock. The majority of the songs are highly catchy and engaging, with a somewhat unique style for Broadway. In the tune “Sex is in the Heel,” a slew of drag queens sing and dance about the sex appeal of a stiletto heel. Ashford, bearing a striking resemblance to an '80s-era Lauper with her white blonde hair, sings a solo song, “The History of Wrong Guys,” which is among the show’s standouts. As Lauren, Ashford sings of her romantic missteps in this lively, poppy number, enhancing the humorous lyrics with her comedic gestures and facial expressions. The show’s closer “Raise Up/Just Be,” bears a resemblance to Lady Gaga’s “Born This Way,” with shoe factory workers and drag queens dancing in flamboyant lace up boots while they sing about the importance of accepting yourself and accepting others. The choreography and costumes also help to sell the songs, thanks to choreographer/director Jerry Mitchell and costume designer Gregg Barnes.

Acting wise, the ensemble cast has terrific chemistry onstage together, especially Sands, who plays well with Porter and Ashford's intense energy. Ashford is particularly amusing and engaging as Lauren, due to her knack for physical comedy and her energetic presence on stage. Porter commands attention as the bold and flamboyant Lola, providing most of the show's humor.

While Kinky Boots bears a striking resemblance to writer Harvey Fierstein’s previous work La Cage aux Folles, this script is markedly less edgy in its humor, despite a few well-placed zingers. (When asked about his unaccepting father who suffers from lung cancer and who wanted him to be a manly boxer, Lola wryly notes that it’s ironic that “fags got him in the end.”) This is also partly due to the fact that such issues as homosexuality and cross-dressing are less provocative on Broadway stages today. In a nod to this fact, Lola informs Charlie that “drag queens are mainstream now.”

Despite the fact that this show feels familiar, it is successfully hilarious and engaging. While the show’s more dramatic and provocative subjects could certainly be played up further, it is still a highly appealing show sure to be a hit with fans of Broadway musicals. As someone who isn’t always a fan of Broadway musicals, I still found much to enjoy. After spending an evening watching colorful drag queens sing about the importance of equality and acceptance, one cannot help but leave the theater with a feeling of joy.