Off Off Broadway, New Musical
Runs through 3.3.13
The Kraine Theater, 85 East 4th Street 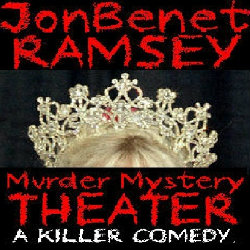 BOTTOM LINE: A hilarious, no-holds musical parody of the most famous murder case of the 1990s.

MediumFace Productions, the comedy troupe responsible for last fall’s hilarious Bayside: The Unmusical, has a thing for the '90s. While Bayside took on the hit high school sitcom Saved By the Bell, their latest endeavor, part of this year’s Frigid Festival, tackles a '90s event a little less easy to laugh about: the 1996 Christmas night murder of six-year-old beauty queen JonBenet Ramsey.

Of course the story of JonBenet’s murder is a goldmine of intrigue, what with the botched police investigation, the weird and suspect handwritten ransom note, the suspicious and filthy rich parents and, most of all, JonBenet herself — a little beauty queen whose creepily sexed-up image has permanently burned itself into most of our minds. But the violent murder and likely molestation of a six-year old girl is also an unspeakable tragedy, which complicates things.

The plot jumps from scenes inside the Ramsey house during the hours between JonBenet’s death and the moment when her mother calls 911, to the hilariously desperate dispatches from investigative journalist Cougar Jones (April Kidwell), both of which are peppered with well-constructed musical numbers.

What ultimately adds to the credibility of JonBenet is the fact that it not only succeeds in being hilarious, it also manages to create a coherent and consistent theory of what happened inside the Ramsey house that fateful night, which cleverly plays with what we know about the case, from the sketchy evidence to the inconsistent accounts from JonBenet’s parents. Clearly, these writers have done their homework and anyone who has spent whole nights on the internet descending into the endless supply of articles, police reports and theories about the case (as I, admittedly, have) will appreciate how thorough JonBenet manages to be in the course of its brisk 50 minutes.

JonBenet relies heavily on the comedic performances of its four actors. Crosbie draws beautifully on the problems of Patsy Ramsey, the wine-doused, cancer-ridden, former-beauty queen (who is jealous of her daughter). The adrogenous Tobly McSmith portrays JonBenet’s older brother Burke as attention-crazed and sex-obsessed, yet undeniably boyish in his Mickey Mouse pajama pants and dinosaur t-shirt. Bob McSmith, as JonBenet’s father, is the least funny but also the least developed of the characters, but McSmith does carry most of the musical numbers with his guitar playing, so he’s by no means disposable. The real showstopper, though, is April Kidwell as Cougar Jones. Kidwell infuses every moment of her performance with fever-pitch hilarity, which climaxes during her song, set to the tune of David Bowie’s “Space Oddity," about having sex with Geraldo Rivera in order to obtain the Ramsey family’s garbage can. I have excessively high hopes for Kidwell’s portrayal of Nomi Malone in MediumFace’s next '90s parody, the forthcoming Showgirls the Musical, which would be a must-see for me regardless of the cast.

I would recommend JonBenet Ramsey: Murder Mystery Theater!!! to anyone who likes low-budget comedy theater and isn’t afraid to laugh at the most taboo of subjects. Oh, and a strong stomach is a must.

(JonBenet Ramsey: Murder Mystery Theater!!! plays as part of the Frigid Festival at the Kraine Theater, 85 East 4th Street, through March 3, 2013. Remaining performances are Saturday, February 23rd at 3:40PM; Thursday, February 28th at 7:05PM; Friday, March 1st at 8:45PM; and Sunday, March 3rd at 12:30PM. Tickets are $12 ($10 for students) and are available by visiting smarttix.com or by calling 212.868.4444. For more festival informtion, visit frigidnewyork.info; for more show information, visit jonbenetlives.com).