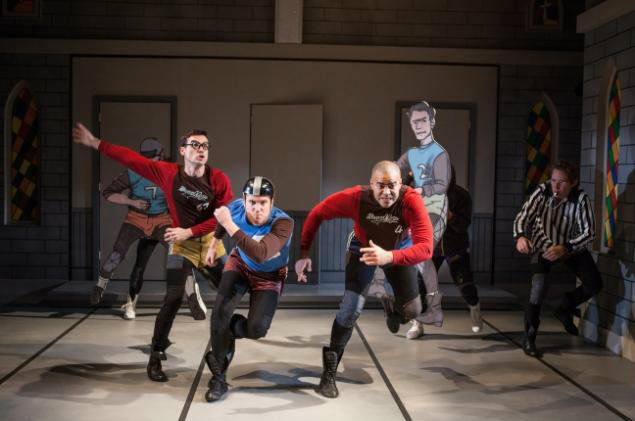 BOTTOM LINE: Rolin Jones’s oddball comedy about 1950’s Roller Derbies makes for an unconventional evening of theatre, but one that will have the audience laughing throughout.

Chances are that when one reads a brief synopsis of Rolin Jones’s The Jammer, eyebrows will raise and heads will be scratched. After all, the Roller Derby is hardly the typical bill-of-fare for the New York theatre scene. Nevertheless, this highly performative “sport” where teams of roller-skaters knock their opponents off the skating track is about as theatrical as it gets; and the cartoonish sets and over-the-top characters currently occupying Stage 2 at the Atlantic Theater Company, certainly make for one silly and entertaining evening. For those still not convinced by the suitability of the subject matter, let us recall Kristoffer Diaz's The Elaborate Entrance of Chad Deity, a play about pro-wrestling that was shortlisted for the Pulitzer Prize. While The Jammer is no Pulitizer-finalist, the broad comedy and slapstick staging is bound to tickle audiences and give a few hearty laughs along the way.

Now what is a Jammer you ask? For those Roller Derby-virgins out there, a Jammer is the team’s designated scoring player who racks up points by lapping members of the opposing team. Theatre sure is educational these days! Jack Lovington (Patch Darragh) fills this position in the Derby, after being wooed away from his steady cab-driving job by Lenny Ringle, a fast-talking league manager (played with slimy humor by Billy Eugene Jones). Despite Lovington’s apprehensions, he ignores the wishes of his controlling fiancée and his stern priest, and pursues his big dreams of rolling to glory.

Once on board, Lovington meets his misfit teammates who shove, spit, holler, curse, and even vomit their way to victory. The rag tag bunch and their unconventional profession have all the qualities one may find in a Christopher Guest movie (Best in Show, A Mighty Wind, Waiting for Guffman,This is Spinal Tap, etc.), and the play similarly captures this brand of ridiculousness shaded with touches of melancholy. Patch Darragh resembles a more svelte Richard Kind in the manner of his performance, bundling naïveté and oafishness into a wholly likable and sympathetic character. Whereas Jeanine Serralles as Lindy Batello, the uncouth and foul-mouthed wildcard of the team, delivers a performance that evidences what it is to be committed to bold choices. Bordering on insane, her manic portrayal delivers the comedic high points of the play. Whether she is railing at hecklers, awkwardly seducing Lovington, or relishing a ride on a Coney Island rollercoaster, Serralles fills each moment with unwavering conviction and comic gusto.

Oddball might be the most accurate descriptor for Rolin Jones’s play, and the director Jackson Gay interprets the material in a way that allows the quirkiness to skate right off the page. At first glance the scenery (by Wilson Chin) may appear a tad low-budget, but it suits the material. The roughly drawn set pieces plus the cardboard cutouts of competing skaters and news broadcasters, feels like something out of Who Framed Roger Rabbit, and these elements root the play in its intentionally campy style. Gay does not overreach with her depiction of the Roller Derby scenes either. Although the ensemble mimes skating, their facial expressions and physical movements are enough to entertain without any superfluous bells and whistles to bog down the production — it is appropriately scrappy.

Rolin Jones has a unique work on his hands; however there are moments when the play feels less committed than the production itself. Jones throws in funny lines and conventions, but sometimes the humor is irrelevant to the story being told (i.e.: a doctor scene involving genital warts). This is not to say that these moments are not deserving of the laughs they receive, but they are cheap laughs that add little to the play even if they do leave audience members Rolin in the aisles. Still, there are many pros in Jones’s work, and the restraint he exhibits by veering away from a traditionally happy ending to intersperse moments of seriousness is admirable, and adds depth to a play that could easily have been gag after gag after gag.

For those interested in Roller Derby, the program contains an insert providing information about local leagues — a reminder that this is not just a thing of the past. While this reviewer is content to leave the skates, padding, and helmets in the rink, I am more than happy to play along within the confines of the Atlantic Theater. Although there are some bumps on the course, The Jammer strides right through the finish line.