In The Wine Time

By Ed Bullins; Directed by Mansoor Najee-Ullah
Co-produced by the New Federal Theatre and Castillo Theatre 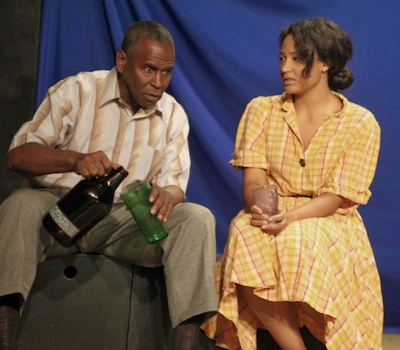 Kim Sullivan and Shirlene Victoria Quigley in IN THE WINE TIME. Photo by Gerry Goodstein

BOTTOM LINE: The Dawsons revel in their ritual of the wine time while trying to make their nephew into a man.

In the Wine Time is a voyeur’s paradise. The highly dysfunctional postwar Black family, the Dawsons, play up their private moments in public view to disastrous effect. This revival directed by New Federal Theatre patron Mansoor Najee-Ullah has the coating of an old family relic now given to the next generation. Ed Bullins’ script, first produced in the late 1960s, is enlivened by a youthful cast and new love lines. Older characters play youthful lovers while younger baddies attempt to fill long britches. Nevertheless, the drive of Wine Time seems both new and distant. I was confused and reassured throughout—a testament of a good revival.

Ullah’s direction comes boldly into view with his infused animal play with the characters. The heated Aunt Lou (Shirlene Victoria Quigley) and Uncle Cliff (Kim Sullivan) indoctrinate their young nephew Ray (Khadim Diop) by normalizing dysfunction. It’s the end of a summer day and they seem just like two colliding cats, braying and hissing their threats of malice and distrust toward one another. The couple is surrounded by their neighbors who come in varieties of tolerance. With all the neighborhood chatter, Najee-Ullah deepens the cacophony by allowing the characters to actually growl at their dissenter/opponent/lover to emphasize that primal attitude. It’s humorous in some instances, but also daring in others.

Another daring choice was the age of the lovers. Sullivan’s Cliff is just as brash, hot-headed, and woefully deliberate as a twenty-something would deliver it, but Sullivan is noticeably older. This point makes the audience wonder about Quigley’s Lou who is a capable young woman: “why is she with this old dude?” The question sticks in our minds as Cliff foams, but then a revelation: Lou is made for Cliff. She’s just as defiant and drunk. Regardless the age, these two found each other based on other things.

The other side of the spectrum is Ray’s emphatic love interest--a lusty older woman. Played with quiet wonder, Eboni Witcher’s Woman is a symbol of young dreams. The woman’s lazy acceptance of such a young tot almost flabbergasts until the rest of the community agreeably chimes in. Khadim Diop’s Ray is quite affable, however, as he downs as much wine as a seasoned lush and speaks with as much bravado as guys twice his age. Diop has a great command of the stage and I’d love to see his growth in other productions.

The cast is full of loud-mouth, brash, and deliciously vibrant supporting characters, all played by actors who embody their roles. There seemed to be a superfluous subplot involving a quartet of neighbors, but they remained relevant because they remained loud. I think the tenet of the wine time is standing your ground, and making your voice known. The dismal end of the play is a symbol of just that. With something so ritualistic and animal, whatever shatters the experience is that thing which is too strong to overcome. Having never heard of this play before, I’m invested in a new ritual: finding shows like it.