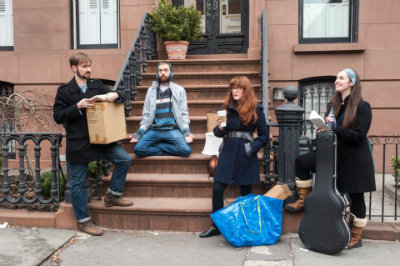 BOTTOM LINE: Crashbox Theater's production of Brooke Berman's stunning play does justice to the work; it's well-staged, well-directed, and boasts a gifted cast.

Anyone who has spent any time apartment hunting in New York City surely knows what a nightmare it can be. For those with limited income and questionable credit scores, finding an apartment is even more arduous, and many find themselves jumping from sublet to sublet or from one disastrous roommate situation to the next. This way of living is explored within Crashbox Theater's production of Hunting and Gathering, a play that originally premiered in 2008 but whose authentic depiction of life in New York City surely warrants numerous productions.

While looking for the right address to call home, the four characters at the heart of the play, all in their twenties and thirties, also endure romantic mistakes and struggle to recover from the pains of lost loves. The play centers on Ruth (Rebecca Schoffer), a thirty-something who has spent her fifteen years in New York in a nomadic existence, jumping from one troublesome living situation to the next. Ruth just ended an affair with a then-married man, Jesse (Jordan Douglas Smith), who in turn is now moving into his own apartment after divorcing his wife. Ruth is house sitting for a man she just met and recently kissed, searching through his books and CDs for some sign of who this person really is, wondering if this might be a potential relationship. Her eccentric best friend Astor (played with comedic skill by Thomas Muccioli) has embraced his nomadic existence in New York City, couch surfing and house sitting as well. When he manages to acquire a van he goes into business as a "Man with a Van," helping other fellow nomadic New Yorkers move from one place to another. Bess (Erica Genereux Smith) is a college student suffering through the pains of living with six roommates in Brooklyn (her monologues on petty roommate squabbles will surely ring a bell with anyone who understands the horror of having multiple roommates in New York). She sets her sights on Jesse, her professor, and seduces him (she argues that since she's only auditing his course she really isn't breaking any rules). Jesse is weak enough from losing both Ruth and his wife to give in to Bess's charms.

As the play goes on, all three characters suffer through flawed living situations and romantic mistakes, looking for some sense of rootedness in their lives. While the plight of the single New Yorker has surely been explored before, Berman's script has an authenticity that makes it seem more poignant and realistic than other stories covering similar terrain, as she authentically captures the experience of being young and broke in New York, in a way only someone who has lived through it can. The lackluster job market and rising rents have spun many twenty and thirty somethings into a perpetual adolescense, something that the characters Astor and Ruth convey well. In one scene the two reflect on the lack of permenance in their lives with Ruth asking, "How come none of the jobs I can do can enable me to live like a person?"

While theatergoers might expect a production in the Access Theater's small gallery theater to be minimalist and not as streamlined as a larger production, Crashbox's Hunting and Gathering made ample use of props, lighting, and the full space of the theater to fully bring the play to life (the production closed March 24th). The talent of the actors and the realism of both the props and the set enabled Berman's play to reach its full potential. Director Alison Beatty enabled the space to convincingly become home to four different characters stimultaneously. I was fully engaged in the production from start to finish, and was sad to see it end. While Crashbox Theater unfortunately only performed Hunting and Gathering a mere four times, they are thankfully returning May 16th through May 24th with a production of another Berman play, The Liddy Plays, which will feature the same cast and venue. If Crashbox's Hunting and Gathering is any indication, their upcoming production will surely be worth checking out.

For more information on Crashbox Theater's upcoming productions you can visit visit crashboxtheater.org or www.facebook.com/CrashboxTheater