How To Do A One Person Show 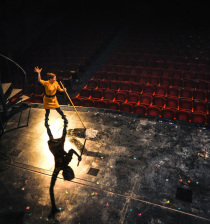 BOTTOM LINE: Kinsella’s fourth one-woman show is a skillfully acted exposition of the joys, quirks, and frustrations of being a NYC writer-slash-performer.

When Kelly Kinsella first walks on stage in How To Do A One Person Show, she seems nervous and overwrought. After all, she explains, she’s just been asked to create and perform a monologue for a sketch comedy troupe. But where to begin?

Despite having written multiple performance pieces in the past, this latest opportunity has purportedly sent Kinsella into a tailspin. Her heart is pounding, her palms are sweaty, and her thoughts are darting from hither to yon and back again. What should her focus be? Should she mimic successful solo-show actors like Sarah Jones, Tracey Ullman, and John Leguizamo? She certainly doesn’t want to follow in the footsteps of Spalding Gray whose 2004 suicide may have been triggered by despair over performing the same autobiographic reflection night after depressing night.

Deep breaths. Yes, that’s it. She’ll begin by taking lots of deep breaths. That should help her focus and figure out how best to tackle this humongous challenge.

Or maybe not. Perhaps a better strategy would be to allow distractions to divert her, at least temporarily, from hitting the keyboard. For one, she’s promised a friend that she’ll bake a birthday cake, so, first things first, Kinsella takes out a box of mix and stirs in eggs and water. In short order — wha-lah — there’s batter to pour into a mold. Even better, she tells the bemused audience, in just 40 minutes there will be cake for all.

As Kinsella finally settles into writing mode, there are moments of hilarity, moments or wry observation, and moments of intense self-disclosure. It builds slowly, bouncing from the zany and surreal to the deadly serious. A vast array of themes, from competition between actors, to the dynamics between immediate-and-extended families, to cancer, are woven into Kinsella’s wonderfully seamless performance. Her timing is perfect as she sings, dances, and talks the audience through the agony and ecstasy of theatrical invention. Aided by only the simplest of props — a table, chair, and easel with a poster-sized pad on which to write the essential components of all good one-person efforts (among them: have a story to tell; write a script and don’t improvise; make the show theatrical; keep it simple; make it personal; tell the truth; share yourself, but don’t overindulge — her physicality is impressive. Thanks to choreography by Peter Gregus and David Anzuelo, Kinsella appears to easily roll on the floor, jump around the stage, and shift positions.

In addition, by deftly moving between self-deprecation and celebration of self, she leaves viewers with a renewed appreciation for everyday vagaries and miracles. There is neither preaching nor sap here, but as the audience munches on cake and sings the B’Day song, even the most cynical will feel uplifted and inspired. Kinsella’s parting shot lays out her heartfelt message: “I am alive and so are you. Celebrate life.” Of course, this is the crux of How To Do A One Person Show and it ultimately has little to do with said subject. And that’s okay.

Unfortunately, additional performances of How To Do A One Person Show have yet to be scheduled. That’s a pity since Kinsella’s hilarious and poignant staging has much to offer not only to general audiences but to aspiring writers, MFA students, and people facing life-threatening illnesses. Indeed, Kinsella’s wit, wisdom, and sauciness are impressive. She’s clearly heeded her own advice, letting go of material that does not move the narrative forward, allowing herself to explore tangents, and sharing her own foibles and struggles.

There’s no question that Kelly Kinsella knows how to do a one person show. But she now faces an even more daunting task — getting the word out and hopefully taking her terrific creation on the road.

(How To Do A One Person Show plays at the at the IRT Theater, 154 Christopher St. buzzer 3B, New York, NY 10014. Presented by the terraNOVA collective as part of the 10th Annual soloNOVA Arts Festival, May 22 through June 11, 2013. Tickets are $20. Purchase tickets at the door or online at terranovacollective.org.)