By August Wilson; Co-Conceived and Directed by Todd Kreidler; in Collaboration with and Featuring Ruben Santiago-Hudson 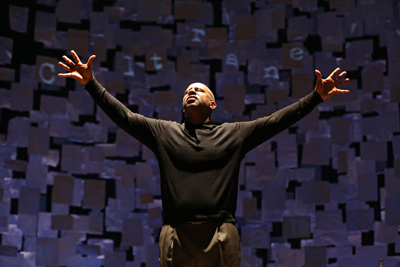 Ruben Santiago-Hudson in HOW I LEARNED WHAT I LEARNED. Photo by Joan Marcus.

BOTTOM LINE: An autobiographical solo show written by the late August Wilson and performed by one of his disciples is an occasionally frustrating reminder of what American theater lost eight years ago.

Sheets of paper are strung up on wire, creating a magnificent, multilayered wall that tapers off sharply on one side, a poignant image of a writer’s work left incomplete. The stage itself is a lone platform floating on a sea of debris, evoking the grit and isolation of an urban landscape. This is David Gallo’s gorgeous set for How I Learned What I Learned, an autobiographical solo show written by the great American playwright August Wilson, which is running at the Pershing Square Signature Center. Wilson himself had performed versions of this piece before he died prematurely in 2005 at the age of 60. It is now being brought back by one of his frequent collaborators, actor Ruben Santiago-Hudson.

To strains of jazz and country, field hollers and gospel, Santiago-Hudson speaks the words of Wilson’s story about growing up in the Hill District of Pittsburgh -- the setting for most of his plays, including the Pulitzer Prize-winning Fences and The Piano Lesson -- and the poets, musicians, and dreamers there who inspired him. They taught the young Wilson a lot, but we discover that much of what he learned, he actually taught himself. A high-school dropout, he practically lived in the library reading everything he could get his hands on. A menial job washing dishes, he tells us, sparked an interest in a book about table manners, which led to Margaret Mead, which, eventually, led to philosophy and religion. A stirring tale about standing outside an expensive nightclub listening to John Coltrane peaks with the realization that the legendary sax player was playing not to the well-heeled crowd inside, who were barely listening, but to the teeming mass of people out on the sidewalk, who were hanging onto every blue note.

How I Learned What I Learned, which is directed by Wilson’s co-conceiver of the piece, Todd Kreidler, is an interesting but ultimately frustrating history lesson for those already familiar with Wilson’s work. And it doesn’t offer a lot to engage those who are not yet familiar. What’s missing, of course, is Wilson himself. And that is not a swipe at Santiago-Hudson, who is probably the only man in the world who could have done this show in Wilson’s absence. (Indeed, the dying playwright himself recommended him for it.) The actor fills Wilson’s place with the ease and charisma that he brings to all his work. But an autobiographical evening with August Wilson should have an element of challenge and danger that could only be achieved by a script that wasn’t frozen in time a decade earlier. Anyone familiar with the playwright’s electrifying 1997 debate with critic Robert Brustein on multiculturalism in American theater knows what is lacking in this piece. It is good enough to give us an idea of what we’re missing but not enough to stir us into the kind of passion that Wilson would have wanted.

For starters it could do with fewer platitudes on the order of “Something is not always better than nothing,” and “Don’t go through life carrying a ten-gallon bucket; cut it down to one gallon.” And more about what Wilson would have thought about the state of African-American theater artists today. Less wan humor about black versus white behavior, which Richard Pryor did much better when Wilson was cutting his literary teeth. And more about Wilson’s take on the rise of white protestors in 2013 waving Confederate flags in front of the nation’s first black president.

This isn’t to say the show should have fewer laughs. One of its most valuable reminders is that Wilson had a terrific sense of humor. But it came with an edge that this production lacks.

Of course, that lack is, paradoxically, part of the poignancy of seeing How I Learned What I Learned. Gallo’s set, which works in stunning concert with Thom Weaver’s multicolored lighting and Gallo’s own projection design, reminds us that, although Wilson lived just long enough to complete his monumental Century Cycle, we’ll never know what could have followed, what could have filled the rest of that backdrop on the Signature stage.

If this show is any kind of cultural success, it will perhaps be measured by the young writers who see it, share in that frustration, and, in response, pick up their own pens, inspired by the vision of the poet from the Hill District.

(How I Learned What I Learned plays at the Alice Griffin Theatre at the Pershing Square Signature Center, 480 West 42nd Street, between Ninth and Tenth Avenues, through December 29, 2013. Performances are Wednesdays through Fridays at 7:30PM; Saturdays at 2PM and 8PM; and Sundays at 2PM. Special performance on Monday, December 23rd at 7:30PM. No performances on December 24th or 25th. Tickets are $75 and can be purchased online at signaturetheatre.org or by calling 212.244.7529.)