How I Learned to Drive

By Paula Vogel; Directed by Jake Lipman
Produced by Tongue in Cheek Theater 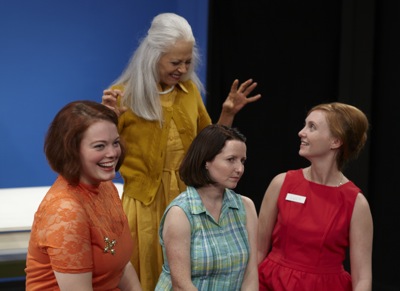 Holland Hamilton, Joan D. Saunders, Jake Lipman, and Shelley Little in HOW I LEARNED TO DRIVE.

BOTTOM LINE: This revival of Paula Vogel's well-known work has a strong cast and a well designed set making it worth seeing, especially for those who have not seen it performed before.

In this revival of Paula Vogel’s unusually structured Pulitzer Prize winning play, a small minimalist set and stage give focus to powerful, emotionally charged performances. While there is not a lot that is new about this production, it does do justice to this intense, one of a kind work which focuses on the emotional and sexual manipulation of a young girl (who ranges in age from 11 to 18 during the course of the play) at the hands of her uncle by marriage.

The girl, L’il Bit (Jake Lipman, who also directed and produced this production) grows up in a well-meaning but strange family who, for the most part, turn a blind eye at the signs that her relationship with her Uncle Peck (Lynn Berg) is becoming increasingly dangerous. Part of L’il Bit’s inability to see her relationship with her uncle (who is married to her mother’s sister) as inappropriate is the fact that so much of her family’s humor centers around being sexually inappropriate. We’re told that many of the family members’ nicknames are references to genitals and L’il Bit’s large breasts are joked about and commented on freely by the family members. L’il Bit’s breasts become a means of torture in her life with her family and classmates relentlessly teasing her over them. In school her breasts motivate boys to pursue her sexually and at home inspire the attentions of her uncle who likes how quickly he can unsnap her bra and requests to kiss her “celestial orbs.” L’il Bit is both repelled by and intiruged by her uncle’s attention, making their situation one that is not completely black and white.

Vogel tells her story in an unusual way, one that makes the play’s more dramatic moments more nuanced and believable. Instead of going straight for a dramatic tone, Vogel mixes in comedy, making this a story that is not all sadness and tragedy, giving focus to this off-beat family. She also makes use of a Greek chorus in several scenes (played by the actors who also play the family members), making the scenes more intriguing. The story is also not told chronologically, without the story’s beginning being revealed until the end, building further suspense and momentum.

One of the strong points of this production is the set which does a lot with very little. The small stage at The Bridge Theater is able to become multiple settings through a versatile set and strong sound design by Philip Rothman. A large, white picnic table and bench cleverly are used to stand in as a fishing dock, the front seat of a car, the family dining room table, a hotel bed, and other settings.

The cast is immensely engaging and likable, especially Shelley Little as Li’l Bit’s mother, who has most of the play’s humorous lines. Jake Lipman has a younger look than the actors who played Li’l Bit in the play’s previous, larger productions (Mary Louise Parker and Elizabeth Reaser). This fact makes some of the play’s more sexualized scenes that take place during L’il Bit’s adolescence and seem more shocking and appalling, whereas the previous actors made these scenes feel like the sad memories of an older, now jaded woman who has since moved on. Lynn Berg is also chillingly creepy as Uncle Peck and Holland Hamilton gives a convincing monologue as the wife of the mentally unstable Uncle Peck.

Overall, this production might not bring a lot of new things to the table, but it is still worth seeing, particularly for audiences who have not yet seen a staging of this renowned work.

(How I Learned to Drive plays at The Bridge Theatre at Shelter Studios, 244 West 54th Street, through November 2, 2013. Performances are Thursdays, Fridays, and Saturdays at 8PM. Tickets are $18 and are available at www.tictheater.com or by calling 212.868.4444.)