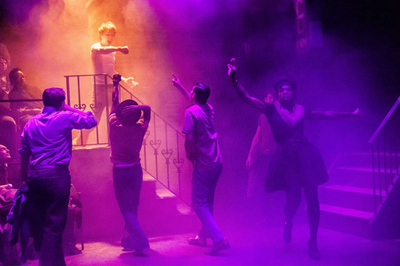 A scene from HIT THE WALL. Photo by Matthew Murphy.

BOTTOM LINE: A beautiful lyrical play about the Stonewall riots -- a must-see for anyone who has had their right to love questioned.

There is so much passion and energy on display in Hit the Wall it feels as if you might just all rise up and head outside for a real life riot. And you wouldn't even have far to go, as the Stonewall Inn -- the site of the infamous 1969 gay rights riot and subject matter of this play -- is only a block away from the Barrow Street Theatre. To tell this story in New York City in spitting distance of Christopher Street is a detail that can't be ignored, and it makes the experience all the more vibrant. The play premiered in Chicago last year to great acclaim and it's no wonder it has made the journey to the city it portrays.

Eric Hoff smoothly directs Ike Holter's Hit The Wall, an ensemble piece with characters constantly coming and going on this particular fateful day. The characters joke, flirt, and just generally just hang out on the Village stoops. They are all types, and broadly drawn ones at that: the sassy, young, short-short wearing gays; the butch lesbian and her conservative sister; the rich guy who likes the company of younger men; the stoner who is new to the gay scene; the black women's-lib fighter; and the drag queen who knows she'll never be accepted the way she is. The remaining characters are types in their own rights: cops who prowl the streets, and musicians who look like they need a shower.

To paint this picture with such broad strokes adds to the statement the play makes: it's not so much about the individual journeys, let's instead focus on the event at hand. Unfortunately, the Stonewall Riots are notoriously unclear. It remains unknown who started the uproar and its escalation is also up for debate, though there are many theories. Hit the Wall portrays with intensity the visceral expression of what the riots felt like emotionally (an artistic interpretation of course) and the audience clearly understands the turmoil unfolding. But because facts are few, it's all vague inference (it's a busy night at the club, people are dancing, police bust in, the patrons resist, people get hurt, the patrons continue to resist, and arrests are made.) With undefined events and undefined characters, Hit the Wall treads muddy ground.

To be fair, the energy from the cast and the production design are enthralling, and the play certainly draws you in. It rests on its emotional connection to the audience, which it does a fine job establishing. Lauren Helpern's set design has the audience in the round (in a symbolic triangle, actually) and the action swirls in and out of playing space. Enhanced by Keith Parham's beautiful lighting design and Daniel Kluger and Brandon Wolcott's powerful sound design, the audience does become an active participant in the uprising. A sense of community is established this way. Live music played on stage by the "Buskers" -- Jonathan Mastro, Ray Rizzo and Indigo Street -- adds welcomed ambiance. First acoustic guitars (a day in the park) and then electric ones (during the riots), the soundscape is smartly conceived.

The characters in Hit the Wall all proclaim "I was there" and that seems to be the takeaway: don't forget that these events happened. It's a statement worth projecting and a play worth experiencing, especially if the Stonewall Riots mean a lot to your identity. For those who have had their right to love questioned, Hit the Wall hits the nail on the head exploring an historic moment well worth exploring. Expect an emotional connection from this play, not a cerebral one, and you'll likely be sucked in to the enthusiasm around you.